He says, She Says

The Writers’ Life
(He says, She says)
Collaborating and cohabitating is not the easiest way to write a crime novel, or any novel. 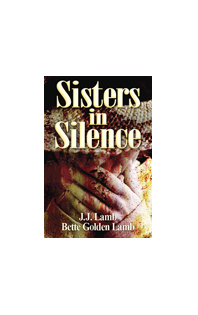 What you usually need to launch a collaborative writing effort are two people who have close to the same level of writing experience, have similar approaches to telling a story, and can spend long periods in the same room, exchanging ideas without killing each other.
We had none of that background going for us, except for the no-mayhem part.
It started one day when J. J. was “between books” and Bette, an RN and artist/sculptor,
came up with an idea for a book she thought J. J. should write.
For months the dialogue went something like this:
“I think you should write this great book.”
“I don’t want to write that book.”
To break the impasse, J. J. brought home a ream of paper, pulled an old portable Royal manual typewriter from a closet, and said, “If you think your idea is so wonderful, then you write it.”
The response, as anyone who knows Bette might expect, was, “Okay! I will!” And she did.
An underlying goal for Bette was to create a strong nurse protagonist as opposed to the usual doctor-hero approach of most medical thrillers. She also wanted to take a big step away from the nurse-as-handmaiden-to-the-doctor stereotype too often found in books, television, and the movies. Something more like “Nurse Jackie,” but without the nose candy.
Collaboration was a completely new experience for J. J., who had always worked solo as both a fiction and non-fiction writer. And other writers warned that attempting to collaborate and cohabitate could produce nasty results.
Big arguments and very tense moments? Oh, yes. About everything -- the meaning and use of various words, how to make dialogue sound like real people, what was or wasn’t a complete sentence, and a few other things here and there that probably should never, ever be mentioned again.
We quickly learned that to have a successful writing collaboration, it was essential to discuss everything and not let down-and-dirty disputes (we still have them now and then) escalate. Also, it was disastrous to allow individual egos to bar the way to compromise.
We continue to work at the process, trying different approaches -- each writing every other chapter, adopting specific characters, taking on certain types of situations and settings, and various combinations of these.
What works best is that after agreeing on a story idea, one of us -- usually Bette -- will write a first draft, with continuous input from the other on plot and character development. Then we reverse roles for the second draft. No matter what crazy course the story-telling takes, we end up sitting down side by side at the computer keyboard, going through the manuscript word by word to create what we hope is the final draft (too it often isn’t).
The magic of the whole process is that the completed ms. reads as a third voice, neither Bette’s nor J.J.’s. People who know us will insist they can tell who wrote which passage or scene. They’re always wrong. In fact, after a book is completed, even we can’t always tell who wrote what.

To date, we’ve written five novels together -- four medical thrillers and a suspense-adventure -- without killing or seriously maiming each other.
.           Our first collaboration was BONE DRY, a medical thriller described by Publishers Weekly as “not for the squeamish.” This was followed by HEIR TODAY…, a suspense-adventure that was compared favorably with the Nick and Nora Charles books. Both were published by Five Star, and are now available as e-books.
This past August, we independently published SISTERS IN SILENCE, another fast-paced medical thriller, as both an e-book and trade paper back.
We’ve discovered that there are incredible advantages to writing and sleeping together: having a wonderful, supportive companion at writer/fan conferences; not being lonely on book-signing tours; and, most important, having someone always there for you when you wake up with an idea in the middle of the night.

Bette Golden Lamb
J. J. Lamb
Bette Golden Lamb and J. J. Lamb are the co-authors of three crime novels. Most recently, SISTERS IN SILENCE, a medical thriller about a fertility counselor who has gone off the deep end; HEIR TODAY…, a fast-paced suspense/adventure featuring a husband-wife team “reminiscent of Nick & Nora Charles;” and BONE DRY, a high-tension medical thriller described as “not for the squeamish.”
They combine collaboration and cohabitation in an air of creative exchange in their home.
When not writing, either with J. J. or on her own, Bette, unmistakably from the , can be found in her studio playing with clay -- she is a professional ceramist, sculptor, and artist. (www.bettegoldenlamb.com) whose creations appear in regional, national, and international exhibitions. She’s also an RN, and a devoted gardener.
“As an RN, I wanted to write medical thrillers that put nurses smack in the center of a story,” she says. “Most such novels have MDs as the protagonist, when in reality doctors sort of breeze in and out of a hospital a couple of times a day, while nurses run and control the hospital environment.”
J. J. is a former newspaper reporter, Associated Press staff writer, trade press correspondent, and freelance journalist. His journalism career was interrupted early on by the U.S. Army, which provided him with a Top Secret clearance, locked room with table, chair, and typewriter, and time to write short stories.
The stories evolved into an original paperback series featuring Las Vegas-based PI Zachariah Tobias Rolfe III. Then came collaboration with Bette on their current series of books. He’s also a proud and skilled jack-of-all-trades, typical of a born-and-raised Hoosier (www.jjlamb.com).
Between them, the Lambs belong to Mystery Writers of America, Sisters in Crime, International Thriller Writers, and the same writers critique group for the past 19 years. In addition to the successful launch of their latest co-authored thriller, they are looking forward to the publication of new individual novels - an Urban Fantasy from Bette, and a new Zach Rolfe caper from J. J. And there is another medical thriller in the works.
Sister in Silence
Fertility counselor Zondra Vesey is not a serial killer -- she’s on a mission, a noble mission.
For ten long years she has slaved to help make one man a star specialist in the highly competitive field of infertility treatment.
Her thanks? Woman after woman sleeps in his bed, fills his personal life -- as she once did.
Instead of loving her, his surgeon’s hands sliced her open, mutilated her insides, and left her sterile, as barren as the women who flock to him for the miracle of motherhood; the women she counsels.
Now, Zondra is angry, grief-stricken, and frilled with sorrow -- a deadly mission burns deep within her.
She will, she must, save her sisters from their suffering.
Posted by Chris Redding at 12:01 AM

A great team and creative writers. I love their books. What's next?

Hi, Mythlover:
Thank you for the great endorsement. Up next is a politico/medical thriller - Seven Days to Dying - probably late January. Hope you'll read it!
Best,
Bette & J.J.