Melinda Leigh is a fully recovered banker, wife, mom, lifelong dog lover, and second degree black belt in kenpo karate. She is the author of SHE CAN RUN, a 2012 Thriller Award nominee and a Kindle Bestseller. Her latest book, SHE CAN TELL, released December 4, 2012 and became an immediate Kindle Bestseller. Find out more about Melinda: website / facebook / twitter
SHE CAN TELL
#1 Bestselling Romantic Suspense
An Amazon editors’ pick for December romance 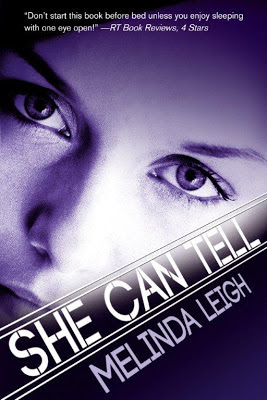 Praise for SHE CAN TELL

“The highly suspenseful plot spans decades, pulling secrets from the past and melding them with the present, and is paired with a steamy romance that explores vulnerability, passion and trust.” ~ RT Book Reviews (4 Stars)

““Leigh has created a nail-bitingly suspenseful romance novel that’s sure to put your manicure in danger.” ~ Booklist/


A horse trainer’s homecoming turns deadly when a vicious stalker, a cold murder case, and a hot police chief threaten to expose family secrets that a killer wants to keep buried.

After a terrible accident ends her riding career, horse trainer Rachel Parker returns to her hometown to a hostile welcome. Her efforts to rebuild the family farm are hampered by her sister’s domestic crisis and a violent vandal who threatens Rachel’s new business and her life. She is also blindsided by the undeniable and unwanted attraction she feels for hot police chief handling her case. Someone is systematically trying to destroy her. Someone who knows private things about her. Someone who’s been watching her…

As his investigation uncovers the turbulent past Rachel keeps carefully hidden, Police Chief Mike O’Connell finds himself with too many suspects and too many feelings for his fiercely independent victim. His desire for Rachel is a conflict of interest that jeopardizes everything he stands for. Long buried family secrets, a skeleton, and a corrupt local official with a grudge against Mike complicate the case, but the escalating violence against Rachel convinces him he doesn’t have much time. Whoever is watching Rachel wants her dead. Mike and Rachel race to untangle a web of deceit and lies that stretches twenty-five years into the past—before her stalker strikes again.


He liked to watch.

To see the secret, private things people did when they thought they were alone.

From the moonshadow of an evergreen, he stared across the weedy backyard at the dilapidated rancher. Harry was inside. The Watcher’s breath steamed out into the crisp winter air. Twenty yards of crabgrass was all that separated him from retribution.

Harry had to die.

It was the only way to make things right.

Impulsive responses, while satisfying, were rarely successful in the long term. Discipline was the key. He’d buried his rage and weighed all the options. Harry’s life against his actions. His future against the impact of what he’d done. Ultimately, it was what Harry intended to do that made the difference.

An hour of standing on the frozen ground, waiting for the house to go quiet and dark, had left the Watcher’s toes with a numb ache. Fiery tingles shot through the balls of his feet as he crept toward a dark window cracked an inch for ventilation. The ground was too frozen for his boots to leave prints, but the crunch of dead grass echoed in the otherwise silent night. He crouched under the window, then peered over the sill. No sound. No light. No movement. He raised the sash and climbed through into the living room. Lacquer fumes and sawdust stung his nostrils. Heat rattled from a baseboard register as the aged furnace tried to raise the temperature above meat locker.

The Watcher had never been in Harry’s house, though the carpenter had invited him over a few times to watch hockey games. They were both Flyers fans. They had other things in common, too, but they wouldn’t be friends. Not ever. Not after what the Watcher had seen—and what he’d heard—the other night.

Betrayal sliced into him like the drop point of his knife through a deer’s belly.

Silver moonlight gleamed through bare windows. In the far corner, a drop cloth shrouded a battered recliner. The gutted house had a hollow, unfinished feel that matched the empty space in the middle of his chest. <\p>

I found your great blog through the WLC Blog Follows on the World Literary Cafe! Great to connect! I hope you stop by to visit me at http://www.scheherazade-thewritinglife.blogspot.com/