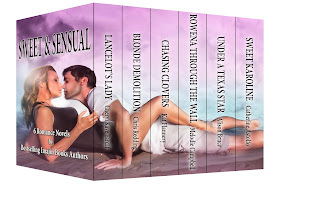 "My employer is the most wonderful person I've ever met," she stated. "He thought I needed a break, so he made all the arrangements and gave me this trip as a birthday present." She snorted. "If he'd known I'd be stranded on your island, I'm sure he'd be mortified."

Jonathan stared at her, his eyes aglow like flames.

Was she the moth?

Watching him, a strange tingle coursed through Rhianna's veins. The intensity of his gaze seemed very personal, as if he'd skimmed the surface of her skin with his fingertips instead of his eyes.

She shivered. Why did her body feel so inflamed?

Jonathan took a sip of wine and licked his lips. Then he smiled, a satisfied gleam in his sapphire eyes.

Her breath caught in her throat.

He knows I'm attracted to him.

The heat rose in her cheeks and she prayed that the soft lighting of the room would hide her reaction. She mentally cursed her sudden weakness. What the hell had gotten into her? She never reacted this way to men. Ever. All the men she'd met were uninteresting and forgettable. She could shrug them off because she never allowed them to impact her emotions. Or her life.

But how many men like Jonathan had she met? She'd spent years holed up with old people―dying people. She'd cut herself off from the world of dating and romance. She didn't want or need a man to complete her, and she certainly could live without physical intimacy.

Yet, here she was wishing Jonathan would kiss her.

She had to think of something else. Anything else.

Higginson's face came to mind. How would he react if saw her stretched out on a sofa, sipping wine with an extremely attractive man? A man who oozed sensuality and made her want to―

Don't think of that, Rhianna!

If Higginson could see her now, he'd probably faint.

She giggled at the thought.

"I, um, was just thinking about someone back in Florida. He'd have a fit if he knew I was stranded here."

Another warning flashed in Jonathan's eyes.

Oh for crying out loud, she thought. What's he ticked off about this time?

"You were given a holiday," he said in a tight voice. "If I were you I'd take advantage of it."