Venice, 1643. Isabella, fifteen, longs to sing in Monteverdi’s Choir, but only boys (and castrati) can do that. Her singing teacher, Margherita, introduces her to a new wonder: opera! Then Isabella finds Margherita murdered. Now people keep trying to kill Margherita’s handsome rogue of a son, Rafaele.

Was Margherita killed so someone could steal her saffron business? Or was it a disgruntled lover, as Margherita—unbeknownst to Isabella—was one of Venice’s wealthiest courtesans? Or will Isabella and Rafaele find the answer deep in Margherita's past, buried in the Jewish Ghetto? 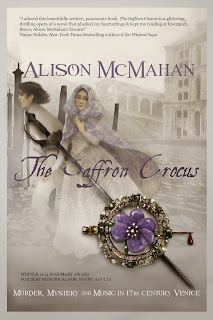 Isabella has to solve the mystery of the Saffron Crocus before Rafaele hangs for a murder he didn’t commit, though she fears the truth will drive her and the man she loves irrevocably apart.

Who knew a singing career would be this much trouble?


“Rafaele!” She flew into the garret. “Piero, it was so wonderful, wait until I tell you!”

The stool next to the bed was knocked over. The tray with the genepy bottle was on the floor, one of the cups broken. The fat candle that had been burning next to Rafaele’s bed had been flung to the other side of the room.. Canvases were strewn all over the floor, some of them slashed, and many of Master Strozzi’s jars of paint elements were broken.

Did Piero and Rafaele have a fight? She quickly suppressed the thought. Who would get into a fight with a man who was already injured?

Something else must have happened.

She walked across the garret. “Piero? Rafaele, are you here?”

Rafaele was not in the bed. The sheets and blankets she had piled on top of him were strewn everywhere. Blood-stained sheets spilled over the edge of the pallet. There was a pile of clothes on the floor.

She walked around to get a closer look.

Not clothes. It was Piero. Face down, one arm stretched out before him, as if in supplication.

A puddle of blood under him. 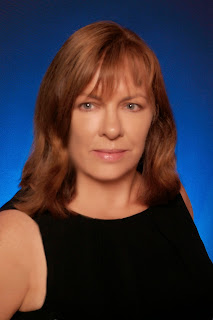 
The cover is the work of fabulous artist Mishi Bellamy. Mishi divides her time between India and France, where she has her own art gallery, the Atelier des Colombes.

Alison McMahan chased footage for her documentaries through jungles in Honduras and Cambodia, favelas in Brazil and racetracks in the U.S. She brings the same sense of adventure to her award-winning books of mystery and romantic adventure for teens and adults.

She loves hearing from readers.