The new video trailer for THE TRAZ was just uploaded to YouTube, complete with the brilliant new cover. One phrase in the trailer struck me the moment I read it: “Now she is in too deep and may never get out…”
This phrase captures the essence of the story. It is the message I was trying to relay to at-risk youngsters during my presentations about making good decisions. 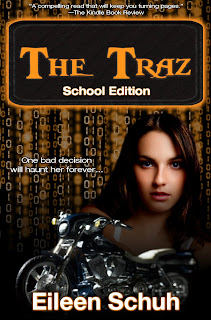 Getting in too deep and never being able to get out…is the horrible part of gang life and…of addictions. It becomes an especially devastating scenario when the person getting in too deep is someone too young to understand. Someone with their whole life ahead of them. Someone with potential to change the world for the better. Someone who started off with a warm heart and clear eyes. Someone who is hurting, perhaps—vulnerable to adults who prey on the weak.
Studies have shown the human brain doesn’t fully develop physically until the age of 25. Before that time, people have difficulty perceiving the results of their decisions, actions, attitudes, and behaviours.
Katrina, the 13-year old protagonist of THE TRAZ, is brilliant. Her father was a cop and had warned her about gangs. She knew what gangs did. She knew the dangers. However, she was unable to appreciate what that would mean to her, personally, should she decide to get involved with The Traz biker gang.
“Now, she is in too deep…” 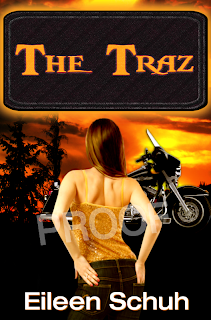 There is no safe way to leave any criminal gang, especially one as powerful as THE TRAZ. Once she becomes a witness to gang activities, no matter how subtle her actual involvement, there is no way the gang will let her just walk away. She becomes a danger to the bikers should she be anywhere except under their direct control.
It is the same scenario with addictions…once one reaches the point where one can admit to the addiction, it may be too late to escape its hold. When I started smoking in my early 20’s, I promised myself that I’d quit when I got married, when I got pregnant, when I had the baby, when I turned 40, when I became a grandma… I was quickly in too deep…
This is the message I want to relay to youngsters and adults alike (even those of us over the age of 25 sometimes stumble)—just don’t do it in the first place. Just don’t. Don’t ruin your life. Don’t think you are smarter than the gang, the drug, the alcohol, the nicotine, the slot machine. Don’t think your next dose, roll, ride, drink, smoke will be your last and then you’ll be able to just walk away free. It’s not that easy. At all.
It might be just one bad decision and then… you’re in too deep, and may never get out.
THE TRAZ now on Amazon in a school edition. eBook, and print. Paperback also available on Barnes & Noble

Eileen Schuh is also the author of SCHRÖDINGER’S CAT, a SciFi novella. THE TRAZ is the first book in her BackTracker Series. The sequel will be released later this year.
Schuh invites you to visit her website or blog and join her on facebook, her facebook author page, or Twitter.
Posted by Chris Redding at 12:06 AM

Thank you for hosting me, Chris. I enjoyed sharing my feelings about THE TRAZ with your fans.