I wanted to be a writer ever since I started understanding myself. Since I was a child I remember myself writing different things, when I was traveling I was keeping a journal and I was writing down all the things that were impressive. I was also writing short stories, poems, thoughts.

2. What drew you to the subject of “London Tube seven stations seven stories”?


I am very fond of London underground, the mere fact that it is the oldest underground in the world has always fascinated me. I have always been thinking that so many things regarding London tube could affect the lives of different passengers, e.g. an accident, a closure of a line, a delay, a special event. That is how the idea of writing short fictional stories combined with historic events that had to do with London tube came to me.

3. What was the best writing advice someone gave you?


Keep writing regardless of the obstacles, of your own fear and insecurity.

4. What was the worst? Did you know it at the time?


The worst advice I had was from a friend who told me: better remain a translator than becoming a writer. At the time I didn’t realize his intention, he wanted to discourage me and I foolishly follow his advice as I was deeply disappointed and actually discouraged.

5. If you could ask your readers one question, what would it be?


Which is your favorite story and character and why. Of course I love all seven stories but I am very curious to find out which one is the most popular. A few friends I have asked they have chosen different stories.


I am a barrister.

7. What authors do you admire?


I admire many authors and I am sure that I will forget names but I am trying here to mention just a few of them. Jack London, Jack Kerouac, Charles Dickens, Isabelle Allende, Jennifer Lash, Jonathan Coe, Jeffrey Eugenides. Among Greeks I like Karagatsis, Costas Tahtsis, Costas Kyriazis, Maria Lambaridou Pothou. And of course Nikos Kazantzakis.

8. What place that you haven’t visited would you like to go?

9. What other time period besides your own would you like to experience?


I am very fond of Tudor times and especially Elizabethan era. I consider that it was English renaissance when many important events happened during that period.

10. What did you enjoy most about writing this book?


The research, the development of the characters, traveling through time.


I was born in Athens in 1968. Since childhood I had two major dreams: to become a lawyer and to be able to write. My first dream became true quite early. I studied Law at the university of Babes Bolyai Cluj – Napoca, in Romania. Since 1997 I have been working as a lawyer. As far as my second dream is concerned, I experimented a lot with writing. I translated two books from English into Greek, “Blood Ties” and “On Pilgrimage”; both book were written by the English authoress Jennifer Lash- Fiennes, both of them were published in Greece by “Kalendis” publications. The “London Tube, seven stations seven stories” is a book that combines two great loves of mine: the English history and the London underground. 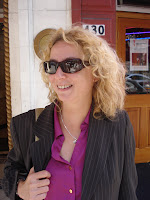 Here are the buy buttons:
http://www.amazon.com/London-Tube-Stations-Evi-Routoula/dp/1909884057 http://www.akakia.net/BOOK_ER_LTSSSS_EN.html
Posted by Chris Redding at 1:46 AM