Today Lynda Hilburn joines me on this blog. She answers my questions graciously. 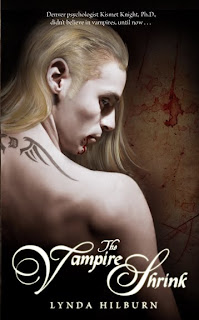 I’ve been writing nonfiction for 30 years: newspaper and magazine articles, newspaper columns, research materials, training materials, journals, etc. Of course, some of my journal entries fell into the category of wishful thinking, which provided great preparation for what was to come. It wasn’t until 2002 that I seriously began exploring fiction.

3. Do you plot or do you write by the seat of your pants?

Sometimes I really wish I could plot. Plotting seems so organized. So efficient. Plotters seem to get to much more done. But, I’m a pantser. I never know what’s coming in the story until I see it on the screen in front of me. I buy books about plotting and they gather dust. I am toying with the notion of being a “pantser with plotting tendencies.” We’ll see how that goes! As long as I give myself room to completely change everything anytime I wish, I think that should work.

4. What drew you to the subject of The Vampire Shrink?

The book is about a Denver psychologist who gets pulled into a vampire underworld, and winds up working with an unusual clientele. I’ve always been a vampire fan. There’s just something about the various dark archetypes for these compelling and frightening creatures. The actual idea for the book came from a client session. I’d listened to a young woman talk about a non-human group she wanted to become part of and I began to notice that her words reminded me of some of the popular vampire books I’d read. She described this group (not vampires, but I do have other clients who live the Goth/vampire-wannabe lifestyle, including drinking blood) as if they were bloodsuckers. After the session, as I sat writing up case notes, I daydreamed about what might happen if I walked out to my waiting room and found a gorgeous vampire sitting there. I went home that night and started writing. It was the most fun I’ve ever had writing.

The biggest lessons I’ve learned have been about the business side of being an author. I had been used to working for myself for most of my adult life. That meant I was comfortable charting my own course and calling the shots. Well, publishing has its own rules and most authors (all?) have little chance of calling any shots. Especially in the beginning. I made lots of mistakes, mostly because I just didn’t know any better. I kept assuming the people I worked with had my best interests at heart and they would give me good advice. It took a while before I understood the challenging nature of the publishing world. I had heard all the talk from author friends about the need to grow a tough skin and making sure I had lots of outside support. But until I held my nose and jumped into the deep end of the pool, I had no idea what they meant. So, I experienced a steep and frustrating learning curve. I know much more about all aspects now than I did then. It’s true. A writer has to cultivate both her creative side and her business instincts. Both are equally important.
6. How many rejections have you received?

I have very thick files full. Not counting the ones I received via email and didn’t print out.

7. Tell me one thing about yourself that very few people know?

I’m an introvert who appears to be an extrovert. Despite my ability to do things like speak to large crowds, present workshops, give lectures, sing in a rock band, facilitate therapy groups and other “on stage” activities, I’m extremely shy. Left to my own devices, without a clear role, you’ll find me hiding in the corner with my nose in a book. I have a little social anxiety.

I work at a mental health center in the Denver area as a psychotherapist. I also see clients privately (just a small number now) on the weekends where I also do hypnotherapy and intuitive counseling.

Denver Psychologist Kismet Knight just wants a little excitement in her life. A little publishing fame and fortune. She doesn’t believe in the paranormal. Especially not comic book children of the night. But when a new client pulls Kismet into the vampire underworld, and introduces her to gorgeous Devereux -- who claims to be an 800-year-old vampire -- Kismet finds herself up to her neck in the undead. Not to mention all the other bizarre creatures crawling out of Denver’s supernatural Pandora’s Box. And if being attracted to a man who thinks he’s an ancient bloodsucker isn’t bad enough, someone -- or something -- is leaving a trail of blood-drained dead bodies. Enter handsome FBI profiler Alan Stevens, who warns her that vampires are very real and that one is a murderer. A murderer who is after her. In the midst of it all, Kismet realizes she has feelings for both the vampire and the profiler. But though she cares for each of the men, the reality that vampires exist is enough of a challenge . . . for now.

10. Who is your favorite character in your book?

I relate most to the main character, Kismet. She’s an idealized version of me: younger, thinner, prettier and having a lot more fun. Through her, I get to push the envelope both personally and professionally. Her clients are even stranger than mine. Who wouldn’t want to hang out with so many great looking males?

Lynda Hilburn writes paranormal fiction. More specifically, she writes vampire books. After a childhood filled with invisible friends, sightings of dead relatives and a fascination with the occult, turning to the paranormal was a no-brainer. In her other reality, she makes her living as a licensed psychotherapist, hypnotherapist, professional psychic/tarot reader, university instructor and workshop presenter. Her first novel, “The Vampire Shrink” -- which introduced us to Denver Psychologist Kismet Knight and a hidden vampire underworld -- was released by Medallion Press, October, 2007. The second book in the series, “Dark Harvest,” released October, 2008. Kindle versions are now available. Several more books are planned. “Undead in the City,” an erotic paranormal novella, is now available in e-form. Her short story, “Blood Song,” is part of the Mammoth Book of Paranormal Romance anthology, April, 2009. For more information, visit Lynda’s website: http://www.lyndahilburnauthor.com/


Here’s a link to buy from Amazon:

Blog will be back on track in July

Yeah!
Posted by Chris Redding at 1:40 PM No comments:

Today Suzanne Brandyn joins me on her virtual blog tour. 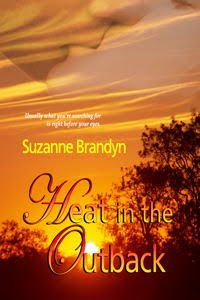 I’m definitely a plotter. When I have the main plot, I jot down notes, and then draw up character sheets. Once I have these organized, I write down a chapter list and draw up something that may happen in each chapter. At times, the story takes a life of its own, but I find direction in taking a few organized steps.

3. What drew you to the subject of ‘Heat in the Outback’?

I used to live on a wheat, sheep and cattle station in the outback. It is here I drew from my experience of the land and it gave me ideas for my story.

4. What was the name of the first novel you wrote? Did you try to publish it?

‘Where flowers Grow’. No, I haven’t as yet tried to get it published as it needs considerable work. The basic storyline is good, and the main plot, but the writing is atrocious. Perhaps one day I will get around to rewriting it. 

I chose Eternal Press as they have a good reputation. Also, I sent them another manuscript but they had recently published a similar story. They liked my writing style so therefore I sent them ‘Heat in the Outback.’

‘Heat in the Outback’ is a contemporary romance.

Sarah Munro returns home to tie up her father’s legal affairs and to sell the property she fled a decade ago, only to find Ethan, the boy she loved now a man firmly entrenched in her family home. The painful choice Sarah was forced to make all those years ago refuses to stay buried and forgotten and no matter how hard she tries to ignore it, Ethan can still make her knees weak with just a single glance.

‘My books are like water; those of the great geniuses are wine. Fortunately, everyone drinks water.’ Mark Twain.

Stephanie Myer. She is an inspiration to any writer.

Suzanne Brandyn lives on the east coast of Australia with its pristine beaches and dramatic coastlines. She has also lived in the glamorous cities and the intriguing, red outback. Suzanne draws on her experiences and brings them to life in her contemporary romance and romantic suspense novels.

Suzanne is a member of Romance Writers of Australia, and she is on the editorial team of their Hearts Talk magazine. Having been behind their Critique Partners Register scheme, undertaking technical and database management, and contributing to the NML (New Members Liaison for Romance Writers of Australia) she currently proof reads and undertakes the member spotlight page.

The soaring temperature in the Outback is not the only heat Sarah Munro faces when she returns home for her father’s funeral. She wants to sell Munro Cattle Station, and return to Sydney. She wants to close this chapter of her life, and then there will never be a reason to return to this dusty one horse town.

Ethan Wade, her first love is at the homestead. Ethan claims he owns half of Munro Station. As they try to settle their differences, a raging attraction ignites.

Will Sarah and Ethan find each other again as their past explodes before them?

Thank you for having me as guest Chris.
Posted by Chris Redding at 2:54 PM No comments:

That's when I'll be back online. I'll a new line up of bloggers and may even blog a little myself.
Sometimes life gets in the way and June is traditionally a crazy month with the end of school.

June 14 I have a guest blogger and then the next post will be the first week in July.
Thanks for your patience.
cmr
Posted by Chris Redding at 8:55 AM 1 comment:

Blog on hiatus this week