How often have you thought about an old TV show or movie you enjoyed and wondered whatever became of the stars who kind of faded from view? When you see Sixteen Candles on AMC, for example, you don’t have to search far to find Molly Ringwald or Anthony Michael Hall because they’re still active, but oh…what about Jake Ryan? ;) Every once in a while I’ll see a “where are they now” click-bait story revealing the whereabouts of former actor Michael Schoeffling, and others like him, and it’s this curiosity that partly inspired my newest romance, Finish What You Started.

I’m not an actor, but I have undergone the career shift from teaching to writing. When we hear stories of former child stars it seems some are bleaker than others. A few transition to adulthood and keep their careers, some fall into financial or legal trouble, and others retire from the public life and start over. Finish What You Started is about two former child stars determined to shed the images thrust on them by their iconic TV roles. Gabby wants to work behind the camera, Dash wants to be a serious actor and leave the geek character he played behind. Initially it doesn’t work out, but when these two meet up after ten years they have a second chance at fame, and love.

All Dash wants to do is prove he has talent beyond his Urkel-like character on TV. Hollywood is ready to dismiss him as a one-hit wonder or one-trick pony, but he’s about to prove everybody wrong. 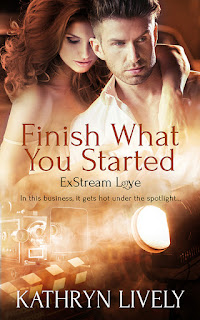 What is your favorite one-hit wonder? It could be a show, song, a movie, whatever. I’d love to know. I’d also love it if you entered the giveaway below. I’m sending out to one winner a prize pack featuring a delightfully snarky coffee mug, a gorgeous mini-notebook, and one audiobook from my backlist, to be gifted via Audible. Good luck!

In this business, it gets hot under the spotlight…

Once a teen idol, Gabby Randall now spends her time behind the camera. With her show Danse Macabre scripted and greenlit for a popular streaming site, she has everything she wants…except her star. Deadlines are looming and she’s desperate to cast the role of a modern-day, motorcycle-riding Grim Reaper. She never thought she’d end up hiring her former co-star, TV’s most beloved geek…and her ex-husband.

Until the day he dies, people will remember Dash Gregory as Freddie “Grody” Grodin, the token geek friend of the cool kids at Wondermancer High. After years of casting agents overlooking him for plum roles, Dash wants to show Hollywood he’s more than a one-note player. He’s ready to break the vicious typecasting cycle, and he’s set his sights on the lead role in a sexy new series too hot for network TV.

When the director yells “Cut!” the star wants to keep up the action behind the scenes. Are Dash and Gabby willing to make ratings history again?

When he returned to the main room, he found the trays folded and back on the rack, and Ace snuggled into Gabby’s side. “Later, buddy.” He snapped his fingers and the terrier bounced toward the bathroom. “He’s too suave for his own good,” he told Gabby with a smile, which soon fell on seeing her suddenly melancholy.

“No, everything was great. Perfect.” She moved to sip her wine, but instead set it on the coffee table. “I was just thinking of what we had here tonight, and it played out like a typical night at home.” After a beat she added, “Well, a typical night if we—I—were a couple. Married…whatever.”

“I hear you.” Damn, she looked cute when she rambled. “I haven’t done typical in a while, and it’s not bad. I still owe you a dinner out, though. I do want to celebrate with something fancy.”

“I’d rather do this again.” Gabby kicked off her shoes and tucked one foot under her. Comfy, at home, not bad at all. “I’ve wanted to do something like this every day for the last ten years.”

With you. She didn’t say the words, but he imagined them on her lips as she bit down.

He sensed a flood coming as she blinked rapidly, and he looked around for something to help stem it. He never bought tissues, usually used TP if he needed to blow his nose, and the idea of handing her a full roll seemed absurd. He settled in next to Gabby, ready to lend a shoulder.

“We don’t have to talk about it if it hurts too much,” he said, more for himself. His mother had once offered to pay for therapy to help him through the worst of the breakup, but he’d refused. Work served him well, when he got it, and he preferred to keep his feelings about Gabby to himself.

Well, himself and one other person.

“I’ll be fine.” Gabby stuck a pinkie finger in her eye to rid it of a tear. “You know me, I’ve always been an emotional gal. Remember when we filmed Doctor Arturo’s death scene?” She sighed and looked at him. “I bawled for days.”

“So did he. He’d just bought a house when he was written out.”

“I also don’t normally wear skirts this short,” she said.

He had no reason to object. “Yeah, I wondered about that. You were always a conservative dresser.” Product of a Catholic family, he guessed, but he liked that about her. Gabby wore everything well, but his mind kept returning to the naughty librarian fantasy. Maybe stick a few pencils in her hair, done up in a bun with a few tendrils hanging loose…

“What’s that look on your face?”

“Hm?” The bubble popped, and he shrugged. “I just remembered I need to renew my library card.”

“You are so silly. What does that have to do with what we’re talking about?”

He chose not to say. “I’m sorry. Just a crazy day. So there’s a reason for the wardrobe change?”

Gabby smiled, flushed. “It goes back to that ‘special friend’ misunderstanding.”

“I hoped to outdo her. Yes, I’m shallow.” She rolled her eyes.

“No, you’re a human with insecurities. Just like me. It doesn’t help we both grew up in show business families where that sort of thing is encouraged.” He could spend the rest of the evening reminding her of all the crap stage parents foisted on their children. You had to have a cuter face than the other boys reading for your part. Your dimples had to go deeper, your freckles had to cross the bridge of your nose just so. How often had Walter and Marie drilled the importance of looking better than every ingénue in California into Gabby’s head? 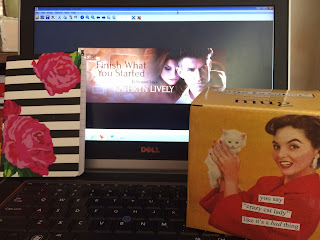 It didn’t go away easily. He could relate. Though his mother hadn’t been as bad as Marie Randall, she’d put pressure on him more than once during casting calls.

He stretched out his arm, inviting her close. For a moment they sat on the sofa and he held her, and it felt nice. It felt like home, like what the last ten years should have been for them. “You will always have a special place in my heart,” he said. “Whatever happens between us on this show, it can only result in good things.”

She pulled back a bit to regard him. “I want to tell you something.” After a beat she added, “Since our first time in Vegas…there hasn’t been a second time for me. With anybody.”

Huh? “For real? Why are you telling me—”

“I’m not asking for you to say the same thing, Dash. I never expected you to go celibate, and I didn’t think it’d be this way for me. I just got busy with work.” She shook her head. “I wanted you to know because…” she swallowed hard, “I never wanted another first time with anybody else.”

She gazed into his eyes. Her deep brown gaze, smooth as chocolate and calling to his soul, drew him closer. He was done for.

Kathryn Lively is an award-winning writer and editor, Slytherin, Whovian, and Rush (the band) fan. She loves chocolate and British crisps and is still searching for a good US dealer of Japanese Kit Kat bars.

My favorite one-hit wonder has to be "You All Everybody" by Drive Shaft. :)

Our Escorts in Gurgaon services conferred are not to be too expensive it will be always afforded to your pocket. Choosing any of the time of the day you will specifically create a selection from our Gurgaon photos gallery. Just in any case you need a spectacular escort’s service in Gurgaon for any special day, you will hire a special girl anytime. Please go to the escort gallery of our website for sexiest call girls in Gurgaon. Every professional man has different choices someone like fat women whereas some like slender girls with big curves. Some are prone to mature ladies whereas some like company of young women. No matter be your personal want, you’ll be at liberty to contact Gurgaon Escorts and call girls at no matter time you would like we are open 24X7 to assist you and to fulfill your desires, your feelings, and your willingness. You’ll delicately discuss details with the employees that are each useful and passionate.

Thanks for sharing this brilliant article it was a very useful and helpful article.