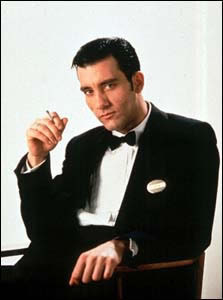 Clive Owen came to my attention when I saw The Driver. It is a series of short films about a man who has to drive a BMW in various situations. One involves Madonna as a diva and was directed by Guy Ritchie. In fact all of them were directed by big name directors. Most were dark and gritty. And Clive Owen was the driver in each one.

When his name was batted around to replace Pierce Brosnan in the James Bond films I was pretty excited. I LOVE James Bond movies.

But that didn't happen.

So what did Clive Owen do?

He was in The Pink Panther with Steve Martin. He's Agent 006. He asks Steve Martin if he knows what that means. And Steve Martin as Clouseau responds, "It means you're not quite good enough."

I think it showed he could laugh at himself. Which if you read this blog ever you know I LOVE that in a man. Or in anyone.

Lord knows I have ample opportunity to laugh at myself. I digress.

Here's my question for this Friday.

Who would you have chosen to play James Bond?

Posted by Chris Redding at 6:39 AM

You had me at Clive. I LOVE this man. He was my first, last and only choice when I heard they were recasting the role for 007. I think I'm in the minority of people who actually liked Timothy Dalton's run as the suave spy. He brought back the darker edge when the producers were trying to get away from camp and back to the roots Ian Fleming had envisioned. I think Clive could have brought that dangerous undercurrent to the role beautifully.

Well, I so love Clive Owen that he would have been my choice for JAMES BOND, although Daniel Craig is incredibly hot as well.

Owen is so damn sexy in that movie!!

Thanks for a great Friday Hunk!

I didn'tlike Timothy Dalton. He was just not believable to me.
And yes, Daniel Craig is yummy. That scene in Casino Royale where he comes out of the surf. He's all buff and wet.
That was a woman's version of Ursula Andress' Bikini.
Woo hoo!
Thanks for stopping by.
cmr

Mighty, Mighty nice... truly inspiration for what is turning out to be another rainy day.

How about someone you might not think of as the British 007? I submit Denzel Washington.

Well, if you have read my blog, you know I have this fixation with Dylan McDermott. He might be good for the role. I don't think anyone will ever be as good as Sean Connery was as James Bond. I do enjoy watching the different attempts though.

For your fridy hunk day I would have chosen James McAvoy! Talk about a hunk!! BTW...I love James Bond too!

Hmmmm, I loved Clive in King Arthur. That was a great role for him. But 007? I would have liked to see Adrian Paul get a shot at that one. I think he came close to getting the part. But then, all of the actors mentioned would make great Sexy Bond characters. I could even picture Denzel in that spot. What an interesting concept.

Ciara,
Adrian Paul would have done it to, uh, for me also.
cmr