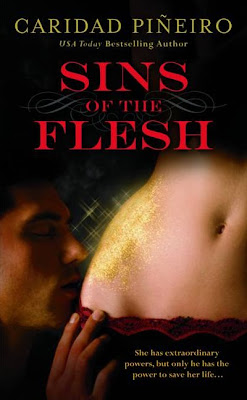 Today is special because I get to give my blog over to an old friend. We've worked together on many projects and I find Caridad to one of the hardest working writers I know. And she's a fantastic writer.

So here's Caridad, under the microscope.


When did you know you wanted to be a writer? In the fifth grade, my English teacher assigned a project – to write a book to be placed in a class lending library. I went home and started writing and haven’t stopped.
How did you pick the genre you write in? I started off writing contemporary romances, but even then I was always trying to work in something dark or suspenseful. When the line for which I was writing folded, I decided to explore those darker elements and found that the book just flew off my fingers and into the computer. I knew then that I had to start working in genres like paranormals and suspense to allow me to explore the deeper aspects of my characters.
Do you plot or do you write by the seat of your pants? I was a pantser, but now that I’m published, I always have to have the synopsis ready first for my proposals. I’ve found that having that basic outline really helps to keep the story from straying into unknown areas.
What drew you to the subject of SINS OF THE FLESH? I was always a science geek and for many years have been following what’s happening with genetic engineering. As I noticed the possibilities that were being created with new gene therapies, it made me wonder what would happen if scientists forgot their duty to society and decided to experiment with genetic engineering for their own personal gain. That’s how SINS OF THE FLESH was born.
Did you encounter any obstacles in researching it? The main obstacle was blending real science into the fiction. The funny thing is that most people will assume that certain things portrayed as fact – like Caterina’s glowing skin – are fiction when in reality, scientists use fluorescent protein tags all the time to track gene expression, thereby creating organisms that glow.
What was the name of the first novel you wrote? Did you try to publish it? The name of my first novel was LONG WAY HOME and no, I never did publish it although I am thinking about pulling it out from under the bed and rewriting it. The original story is about a Cuban rebel who falls in love with a Main Line physician who is visiting Cuba during the Castro rebellion.
What do you know now that you are published that you didn’t know pre-published that you wish you knew? I wish I knew how much more work was involved in the post-publication process so that I could better plan my time for things like promotion, revisions, galley proofs, etc. There’s a lot of work after your book is sold, possibly more work than that involved with writing the novel.
How many rejections have you received? At least 30 to 40. I think that for every 3 proposals that I write, I’m lucky to have one that sells.
If you could ask your readers one question, what would it be? What makes a book a keeper for you?
Describe your book. SINS OF THE FLESH is the story of a woman – Caterina Shaw -- who has been genetically engineered against her will. When one of the scientists conducting the experimentation has a change of conscience and decides to blow the whistle on the illegal experiments, he is murdered by his partners. Caterina escapes during the murder and the partners decide to frame her to protect themselves. They also hire a mercenary – Mick Carrera -- to track down Caterina and return her to the lab. Their hope is that Mick will kill Caterina, but when Mick finds his prey, he discovers all that he has been told is suspect. Soon, Mick and Caterina will find themselves trapped in the scientist’s game and trying to survive both their attraction to one another and a madman sent to kill them.
What do you consider your strengths in terms of your writing? I think my greatest strength is writing emotionally compelling characters that stay with you long after the book is done.
What do you consider your weaknesses? Description. I really struggle with not having just a bunch of talking heads.
What’s your writing schedule? I write every day on the train to and from work and then put in several hours on the weekend.
Who is your greatest cheerleader? My family and my friends at the Liberty States Fiction Writers. (http://www.libertystatesfictionwriters.com/)

Caterina Shaw’s days are numbered. Her only chance for survival is a highly experimental gene treatment – a risk she willingly takes. But now Caterina barely recognizes herself. She has new, terrifying powers, an exotic, arresting body — and she’s been accused of a savage murder, sending her on the run.
Mick Carrera is a mercenary and an expert at capturing elusive, clever prey. Yet the woman he’s hunting down is far from the vicious killer he’s been told to expect: Caterina is wounded, vulnerable, and a startling mystery of medical science. Even more, she’s a beautiful woman whose innocent sensuality tempts Mick to show her exactly how thrilling pleasure can be. The heat that builds between them is irresistible, but surrendering to it could kill them both . . . for a dangerous group is plotting its next move using Caterina as its deadly pawn.
Thank you Caridad for stoppin by today.
Posted by Chris Redding at 11:47 PM

Hi Caridad,
What holds me in a book and will bring me back are the characters. If they're memorable and grab me, make me feel invested, I'm a fan for life.

Great interview. It's always nice to find out about authors and Chris does such a wonderful job in bringing it all together for us readers.

Congrats on Sins of the Flesh, it's on my list!

Thanks, J! I'm with you on the characters. It's what makes a book worth reading.

Chris - thank you so much for having me here today.

First I want to say how much I like this blog.
If anyone has read ANY of Charity's book, you will get the full flavor of every character from the first chapter. She brings surprise after surprise in the twists and turns her stories take, and the love scenes are right out of the RED HOT LOVERS handbook. Charity's characters are deep sensual and engaging. Her men are so sexy and hard, just like I like em.
Continued success to her always.

If the characters don't pull me into the story in the first few pages, it just doesn't work for me. I'll usually finish the book but without a lot of excitement. Thanks for having good characters, Caridad. Have a great evening everyone. Hugs to all.