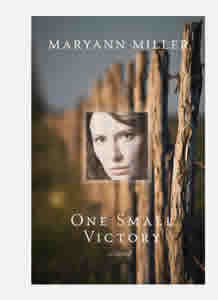 When I was a child, this chili was made every Sunday and that was the one day of the week that the “cook” took the rest of the day off and we were free to eat a bowl whenever we were hungry. Some of us liked to eat it spread generously over an open-faced hamburger bun. We called it a chili burger.

I thought of those great, lazy Sunday afternoons when Jenny in One Small Victory needed some “comfort food” for her children. What better than a bowl of Gringo Chili.

One Small Victory Blurb:
Life can change in just an instant. That's the harsh reality that Jenny Jasik faces when her son is killed in an automobile accident, but never in her wildest dreams did she ever expect to

be working undercover as a member of a drug task force. She is, after all, just a Mom. But don’t discount what a mother can do when the safety of her children is at stake.

BIO:
Maryann Millers professional experience includes magazine and newspaper work on a national and regional level. The Rosen Publishing Group has released nine of her nonfiction books including the award-winning, COPING WITH WEAPONS AND VIOLENCE In School and On Your Streets. In addition to One Small Victory, she has two other books published. Play It Again, Sam is a “second time around” romance, and Friends Forever is a young adult novel on Kindle. Open Season, the first book in a mystery series featuring two women homicide detectives in Dallas, will be released in hardcover December 2010.

I'm going to add Gringo Chili to my collection of chili recipes. So far my most unique ones are one for white chili and one with garbanzo beans.

Carol, is your white chili the one with turkey? I like that one, too. Don't care for garbanzo beans, so I won't be looking for that one. LOL

I'll have to try your chili recipe--minus anything spicy, lol.

You certainly are prolific, Maryann, and in two different genres. Good luck with your sales.

So this is going to sound stupid...but I need a recipe like this that ISN'T hot. lol I have a whimpy mouth, but I love Chili. Go figger, huh? lol

Yes, my white chili has turkey. I have all these recipes but I still like Texas Chili best of all.

This chili is very mild. That's why it's called Gringo Chili. That one little can of green chiles won't hurt you. :-)