Death swept up the mountain and across the frigid snow, giving no warning, no threatening growl, just spreading tendrils, searching for a victim while Stone Mountain Resort buzzed with energy, unaware of the impending doom.
Kalin Thompson gunned the engine of her snowmobile, forced its skis over a mogul, and sped toward the summit of the Alpine Tracks run. The Holden ski team owned the race course for next twenty minutes, and when the local team finished, Kalin planned to ski the gates, just for one run, just for the adrenaline rush.
Her sled hit a patch of ice and slid toward a chairlift tower. She gripped the handlebar and leaned left, edging around the structure, brushing the metal side with her ski pants. Damaging equipment five days into being the director of security at the resort would not impress her boss. She regained control and drove toward the summit. Exhilarated by the ride, she skidded to a stop beside Ben Timlin and let out a whoop.
Giving her a wink that could seduce even the coldest of hearts, Ben said, “Enjoying yourself?”
Kalin glanced around and checked no one was looking in their direction. She leaned over the handlebar, their ski helmets thudded, and she kissed Ben. “I am now.”
At the starting gates, a super-G racer sliced his skis backward and forward, leaning hard on his poles in an aggressive stance, anticipating the signal to launch onto the course. Frozen breath exploded from his lungs as he waited for the skier ahead of him to clear the course.
Kalin undid her helmet’s strap and pulled her neck tube over her chin. “How’s the training going?”
“Not great. I’m surprised Coach Jenkinson hasn’t cancelled the session.”
“Why?”
“More than half the racers either slid off the course or fell. One sprained his ankle.”
“Snow injection?”
“Yup, the course is a skating rink.”
Stone Mountain’s one hundred and fifty-six-person chairlift covered five meters per second from the bottom of the Alpine Tracks ski run to the summit, and the lift clanged around the unloading station, dropping skiers and their gear several meters from where Ben and Kalin waited. Kalin counted the last of the team members arriving at the summit. Six skiers still had runs to conquer before she could ski. 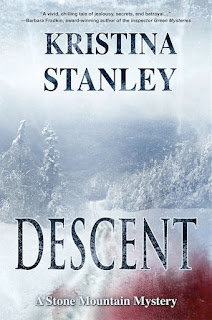 When Kalin Thompson is promoted to Director of Security at Stone Mountain Resort, she soon becomes entangled in the high-profile murder investigation of an up-and-coming Olympic-caliber skier. There are more suspects with motives than there are gates on the super-G course, and danger mounts with every turn.

Kalin’s boss orders her to investigate. Her boyfriend wants her to stay safe and let the cops do their job. Torn between loyalty to friends and professional duty, Kalin must look within her isolated community to unearth the killer’s identity.

Kristina Stanley is the best-selling author of the Stone Mountain Mystery Series. Her first two novels garnered the attention of prestigious crime writing organizations in Canada and England. Crime Writers of Canada nominated DESCENT for the Unhanged Arthur award. The Crime Writers’ Association nominated BLAZE for the Debut Dagger. Her short stories have been published in the Ellery Queen Mystery Magazine and The Voices From the Valleys anthology. She is also the author of THE AUTHOR’S GUIDE TO SELLING BOOKS TO NON-BOOKSTORES. 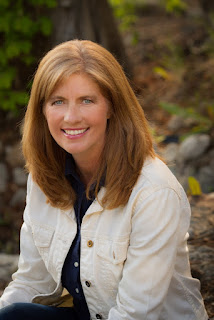 LINKS
I’ve put the booklinker link first, but not sure if it will work for you. If not, use the second link.