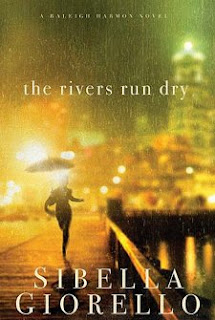 The Rivers Run Dry by Sibella Giorello is about Special Agent Raleigh Harmon who was recently transferred to the Seattle office because of politics.
When a hiker goes missing Raleigh is assigned to the case with her mentor who just wants to concentrate on his own cases. He isn’t interested in what might be a girl who ran away.
Raleigh investigates mostly on her own which does do anything for her career in terms of office politics. Once again, she is the outsider.
At the same time she is dealing with her mother’s anxiety and her aunt’s new age way of thinking.
Raleigh is a flawed character. She is three-dimensional and I’m not sure I liked her at first, I liked her by the end. Instead of a spunky strong, character, she was a quiet and strong character. Women are rarely written that way, especially by women authors. She was a refreshing change.
The story was gritty and the author evoked a strong sense of place. I want to hike in the Cougar Mountains. The description was sparse, but effective.
I would recommend this book to anyone who likes mysteries.
Posted by Chris Redding at 11:21 PM