Recipes Associated with HUNTING FOR HEMINGWAY By Diane Gilbert Madsen 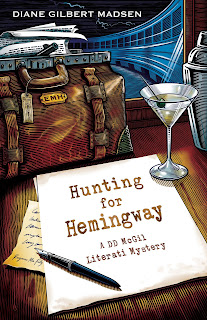 The second DD McGil Literati Mystery, Hunting for Hemingway, is about – you guessed it – Ernest Hemingway. Today I’m blogging with some of his favorite recipes I gleaned from various places as I did research on my mystery novel. We all know Hemingway was famous for his great literature, beautiful women, and strong drink. So much so, that there’s one recipe I didn’t include - Hemingway’s Death In The Afternoon cocktail recipe. It uses Absinthe, which is illegal. And yes, there’s now a legal alternative, but instead I’ve included the Americanized version that uses Pernod.

You’ll also find some wonderful corn-based recipes from the Graue Mill in Oak Brook, Illinois, which is where the exciting climax of Hunting for Hemingway takes place. The Mill, opened in 1852, is the only operating waterwheel gristmill in Northern Illinois and was once a stop on the underground railway. If you visit the Chicago area be sure to stop by to see this wonderful mill and watch them grind their own corn. You can take a peek what the inside of the Mill looks like if you check out my book trailer video on YouTube at www.youtube.com/watch?v=hb3v3DfyXjg or go to my website - http://www.dianegilbertmadsen.com Hope you enjoy all the recipes!

There seem to be three versions of the Papa Doble and they vary by including or excluding light vs dark rum, the simple sugar and the grapefruit and marascino or maraschine liqueur. I like to host a Hemingway Cocktail Party and have my guests vote which one they enjoy the most!

Version 1.of the Papa Doble

It is widely known that Ernest Hemingway enjoyed a drink or two and that he was quite picky about what he was drinking - he definitely had his preferences and the Daiquiri was one of them. In 1921 Contstanino Ribailagua, of El Floridita in Havana, created this variation in honor of his Daiquiri-loving regular. At the bar it was often served frozen and that's easy to do, just add 3/4-1 cup of ice to a blender. For Hemingway himself the Hemingway Daiquiri (or Papa Doble) was served without sugar and is almost always printed that way although most people prefer the sweetness. 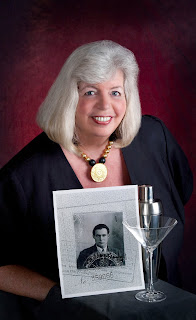 1. Pour the ingredients into a cocktail shaker filled with ice.

3. Strain into a chilled cocktail glass.


Version 2 of the Papa Doble

John Apodaca of Daddy-O’s Martinis has tried to eliminate the controversy and confusion over the recipe for the La Floridita Daiquiri also called the E. Hemingway or Papa Doble that was invented in the La Floridita bar in Havana Cuba in 1934. This bar is where Ernest Hemingway would drink this concoction invented by the then head bartender and later owner Constantino Ribalaigua. There was a 1934 edition of a souvenir hand book of the cocktails from this bar with the recipe for this drink and later additions with similar drinks and American versions with misinterpretations due to a translation error. The original ingredients include light rum, juice of 1/2 a lime, sugar or sugar syrup and and maraschino liqueur blended with ice.

When Americans had translated the recipe, the word for lime in Spanish is limon verde here in the States that was interpreted as lemon thus the first error. Another version added half a grapefruit and some even thought of using maraschino juice from the jar of cherries and even blending it with ice in a machine, that's how far it has gone. In Ted Haigh's book Vintage Spirits and Forgotten Cocktails he's researched the matter, found the various errors, additions, number of recipes and has found the original cocktail that was a favorite of Ernest Hemingway.

2 oz of light rum such as Bacardi silver or Havanan Club, Brugal.

Sift flour and baking powder, mix in milk and eggs, stir in cornmeal; add remaining ingredients in order and bake in well-greased pan in 425" oven for about 20 minutes. May bake in 8X8 pan and cut into squares.

Pour boiling water over cornmeal and cook slowly for 3 or 4 minutes. Remove from fire and add salt, butter and egg. Mix thoroughly. Drop a teaspoon at a time on greased cookie sheet. Bake for 40 minutes in 350° oven or until delicately brown. If desired, add grated cheese to mixture. Very tasty when served on a canapé tray.

Hunting for Hemingway
Posted by Chris Redding at 11:42 PM