So This is a Literary Series. . . By Donna Fletcher Crow

It was really just a throw-away line.  An interviewer on a recent blogtalk radio show had asked me about the backgrounds of my romantic suspense series The Elizabeth & Richard Mysteries.  I explained that The Shadow of Reality is set at a mystery week played out in the style of a Dorothy L. Sayers novel and that book 2 in the series A Midsummer Eve’s Nightmare is set at a Shakespearean festival with obvious references to the bard.

“Ah,” my interviewers said, “So this is a literary series— all featuring different literary figures.” 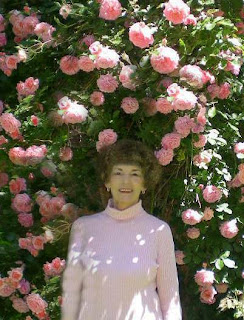 Well, duh.  Elizabeth and Richard are both English professors (She’s Dr. Elizabeth Allerton, head of the department, he’s Dr. Richard Spenser, the newly hired faculty member) and I’d just told him all about how Elizabeth is attracted to this English gentleman playing a Lord Peter Wimsey-style role for the week and then in the next book how Elizabeth’s sister is a costume designer for the Shakespeare festival and her roommate is an actress and then it turns out that Desdemona’s perfectly acted death scene wasn’t acting. . .
But, honest to God, I had never seen developing plots around literary figures as a driving theme of the series.  Well, that’s going to change, I can tell you.
Background is one of the factors that always drives my novels.  Of course, story is paramount. Without a good story— well, there’s no story.  And without characters there’s no one to make the story happen.  But where it all happens is of great importance to me.  I like to think of my settings as characters in my novels.

I’m passionate about doing on-site research  for all my books.  I make it a hallmark of my writing to try to give my reader a “you are there” experience when developing the background of my novels.  And that means being there myself first.   I try never to have my characters go any place I haven’t been or have experiences I haven’t had— with the obvious exceptions of the occasional abduction and stumbling over dead bodies, you understand. 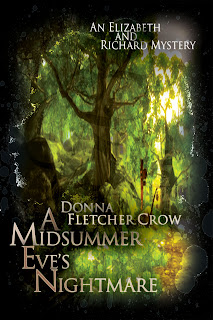 That means book 3 will have to be Jane Austen.  I’m already compiling a list of tea shops and country houses we’ll have to visit. And this is one research trip my husband, who is fond of his creature comforts and thinks I spend far too much time tramping around in the mud and scrambling over crumbling ruins, has agreed to go on.

In The Shadow of Reality “reality blurs with fiction and Elizabeth is drawn into a dark mystery which she is compelled to solve at her own peril. The characters are well developed and the action flows at a rapid pace that makes it impossible to put the book down. It is a thoroughly satisfying read and an intriguing idea to mix the roles of actor and audience, a complex dance of relationships that keeps the reader wondering what is true and who is real."
--Gwyneth Bledsoe, Death Before Breakfast
“A Midsummer Eve's Nightmare has all the elements of a throat-gripping, sleep-robbing thriller, while still wooing the reader with the tenderness of sweet romance. Set in the idyllic Southern Oregon town of Ashland, where bard-lovers abound, this is a charming page-turner that will keep readers on edge to the very end.”
--Kathi Macias,  People of the Book

Donna and her husband have 4 adult children and 10 grandchildren.  She is an enthusiastic gardener.  To see the book video for A VERY PRIVATE GRAVE and pictures from Donna’s garden and research trips go to: www.DonnaFletcherCrow.com.
Her blog is at: http://www.donnafletchercrow.com/articles.php
You can follow her on Facebook at:  http://ning.it/eLjgYp
And buy her books here: http://www.amazon.com/Donna-Fletcher-Crow/e/B000APWGI4/ref=ntt_dp_epwbk_0
Posted by Chris Redding at 11:53 PM

Chris, thank you so much for having me back on your blog. I always love visiting with your readers.