This is a day late and Harry is a gracious guest for understanding.

Many thanks to Chris for inviting me onto her blog page. It’s very nice here. I feel like the cool JV kid riding in the back of the bus with the varsity squad to the away game. I hope I don’t say anything dumb and ruin it. (Chris here: That’s sweet!) 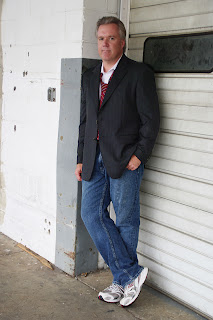 It’s called ZOO MONDAY and it’s something I’ve had kicking around for a while. It’s about a teenager who achieves a kind of notoriety for a murder he didn’t commit, and the anarchic death cult that grows up around him. There were a lot of almost magical aspects to the original drafts of this novel, a kind of wildfire communication across social and class divides as well as a rapid snowballing of events, that some readers wouldn’t fully accept. Most of these difficulties have been laid to rest in our new hyperspeed, socially networked world, and I was able to go back and add another whole level to the book. We live in an amazing age, one in which you can make a snarky comment on a popular blog at 3pm, go viral at 3:10, and see yourself featured on Salon.com at 6pm. It’s exhilarating and dangerous.
Tell us one thing about yourself that very few people know.
I was Chris’s first guest author for AuthorsDay, back in early 2009. And let me say, things have certainly changed around here. Look at all this terrific content! Interviews and excerpts and important people stopping by. Two years ago, this blogspot was uncleared land all the way down to the river. A few thatched cyber-huts, “Hot Hunk Friday,” and a communal water trough. Not anymore. Now it’s first class all the way. The catering table in the Green Room here is incredible.
Author Bio:
Harry Ramble is the author of the novels SEX OFFENDER LIVES HERE (2008) and THE END IS NEAR (Dec, 2010), both from Ebb Press. Look for his next book, ZOO MONDAY, in May of 2012. Harry blogs at Harry Ramble’s E-Z Epiphany Dispenser (harryramble.com) and can also be found at ebbpress.com and twitter.com/HarryRamble He lives at the with his wife and two children.
Book Blurb for THE END IS NEAR:
"It was all for nothing. There's nothing to say."
On his forty-fifth birthday, as his hostages dozed fitfully and state police prepared to take him by force, Nathan Huffnagle penned nine last words into a journal recounting a remarkable week's worth of events. Then he placed the cold steel circle of a shotgun barrel beneath his chin, gripped the trigger, and pulled. And his life began again.
Nathan had hoped to pay back one injustice with another, and tip the scales back to even. But so few of us have a real talent for havoc and vengeance and violence. And our cherished grievances and justifications rarely match up so neatly with the realities of our lives. Now, frustrated at every turn and pestered by a series of seemingly angelic visitors, Nathan makes a hospital-bed deal with Death-the Big Guy himself. Will he receive the release he desires? Or a new lease on life?
The end is always near, but it's never too late to live.
Infused with humor and sadness, restless longing and regret, flights of fantasy and the sheer damnable contrariness of real life, THE END IS NEAR is a tale of redemption like none you've read before.

Posted by Chris Redding at 6:51 AM