THE RULES OF DREAMING


The Rules of Dreaming

A novel of madness, music — and murder.

A beautiful opera singer hangs herself on the eve of her debut at the Met. Seven years later the opera she was rehearsing—Offenbach’s Tales of Hoffmann—begins to take over the lives of her two schizophrenic children, the doctors who treat them and everyone else who crosses their paths, until all are enmeshed in a world of deception and delusion, of madness and ultimately of evil and death. Onto this shadowy stage steps Nicole P., a graduate student who discovers that she too has been assigned a role in the drama. What strange destiny is being worked out in their lives? 
Nicole was nimble and petite and very pretty. No, I take that back—“pretty” doesn’t come close to doing her justice. She was one of the most beautiful women I had ever seen, with cascading red hair and a bold, astonished look in her eyes that made her seem at once wild and angelic. But since my profession has liberated society from all of its taboos save one—that a psychiatrist shall not fall in love with his patient—all I could do was listen sympathetically as she pulled herself back together and prepared to return to her studies. I put her on appropriate medications and she began to make progress immediately.

As it happened, Nicole had been in the lounge when Hunter sat down to play the piano...

“Nicole,” I said, “did you hear Hunter playing the piano this afternoon?”

“Yes I did.” She stopped in the doorway, framed in the shadows that darkened the adjoining hall. “It was impressive, wasn’t it?”

“Impressive isn’t the word, when you realize that he’s never had a lesson or even touched a piano before.”

“Do you know what piece of music he was playing?”

“I think I’ve heard it before. One of the German Romantics, I think, maybe Schumann.”

She started through the door, but just before she disappeared into the shadows she turned back around and her eyes caught a sparkle of the afternoon light. “He went mad, you know.”

“Robert Schumann. The composer. Died in an insane asylum.” 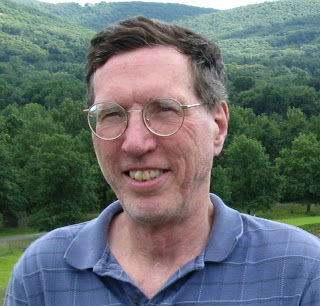 
Bruce Hartman has been a bookseller, pianist, songwriter and attorney. He lives with his wife in Philadelphia. His previous novel, Perfectly Healthy Man Drops Dead, was published by Salvo Press in 2008.

Posted by Chris Redding at 2:20 AM

Thank you for this ever so creepy excerpt. I think asylums do that to me though.

After reading the blurb and excerpt, I wonder what's going to happen to poor Nicole!
catherinelee100 at gmail dot com

Sounds like a compelling story. I enjoyed the excerpt, thank you.

Thanks for the excerpt

I love the way you use descriptive imagery bruce! I really have a feel for the story!