A young curandera, a medicine woman, intent on uncovering the secrets of her past is forced into a life-and-death battle against an evil Archbishop. Set in the mystic land of Aztlan, The Unholy is a novel of destiny as healer and slayer. Native lore of dreams and visions, shape changing, and natural magic work to spin a neo-gothic web in which sadness and mystery lure the unsuspecting into a twilight realm of discovery and decision. 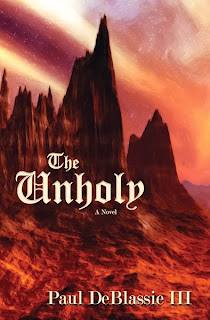 
“Help me? Help yourself! Face what is yours to face,” Elizabeth hissed. She yanked the door open then forced it to slam behind her.

Claire stood still for a moment, feeling as if a tornado had swept through the room. Elizabeth’s demand had left her shaken. She drew a deep breath, then went to her desk and picked up her tea, noticing her trembling hands.

Turning toward the window, Claire saw a muscular orderly accompanying Elizabeth to the locked ward at the far end of the hospital compound. A flock of crows circled high overhead, seeming to follow the two receding figures. As they arrived at the outer doors of the locked unit, the orderly reached for his keys. The crows circled while the two crossed the threshold of the unit, Elizabeth suddenly pausing, turning, and looking outside, her gaze riveted on the flock of birds.

All but two flew off, disappearing into the piñon-covered hills. The two that remained came to rest on the red brick wall adjacent to the locked unit, their black eyes boring into Elizabeth. She looked panicked then enraged and, shaking a finger at the creatures, yelled something. Her frantic gestures told Claire that she was screeching curses to ward off evil.

Claire took a step back from the window, from the impact of Elizabeth’s rage.

The orderly grabbed Elizabeth roughly by the arm and pulled her inside.

The crows waited, watched, then flew away.

Paul DeBlassie III, Ph.D., is a psychologist and writer living in Albuquerque who has 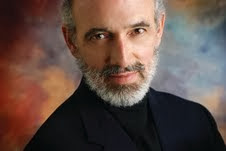 treated survivors of the dark side of religion for more than 30 years. His professional consultation practice — SoulCare — is devoted to the tending of the soul. Dr. DeBlassie writes fiction with a healing emphasis. He has been deeply influenced by the mestizo myth of Aztlan, its surreal beauty and natural magic. He is a member of the Depth Psychology Alliance, the Transpersonal Psychology Association and the International Association for Relational Psychoanalysis and Psychotherapy. LINKS
Author Links
Amazon Author Page: http://www.amazon.com/Paul-DeBlassie-III/e/B00E5TBJXY/ref=ntt_athr_dp_pel_pop_1
Website: http://www.pauldeblassieiii.com/
Blog: http://pauldeblassieiii.blogspot.com/
Buy Links
Amazon: http://www.amazon.com/The-Unholy-Novel-Paul-DeBlassie/dp/0865349592/ref=sr_1_1?ie=UTF8&qid=1379592287&sr=8-1&keywords=the+unholy+paul+deblassie
BN.com: http://www.barnesandnoble.com/w/the-unholy-paul-deblassie/1116061527?ean=9780865349599

If you have difficulties with the code, feel free to use this html link:
http://www.rafflecopter.com/rafl/display/28e43419//
Posted by Chris Redding at 3:41 AM

Chris...thank you for hosting The Unholy!

Sounds like a great book, I can't wait to read it.

Sounds like a great read!!
Thanks for the chance to win!
natasha_donohoo_8 at hotmail dot com