The Shenanigans of Time


The Shenanigans of Time is an absorbing, vivid collection of interlocking stories. P. A. Chawla, reveals myriad emotions - the turmoil and transcendence of childhood, parenthood, sex and love – that shape immigrant lives.

Whether it is the motelier Deven Shah and his deep seated desire to be embraced as the quintessential local only to be regarded as a foreigner by his own child, or Saya Sharma who fades in and out of her suburban life like a migratory bird, or the visiting Feroz grasping for a chance at domesticity with the volatile Rita, The Shenanigans of Time is ultimately a hymn of praise for the resilience of the human spirit and the desire for a place to call home. 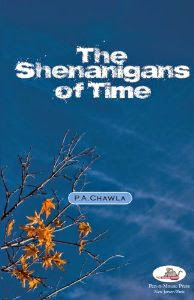 Poonam Chawla migrated to United States from India in 1982. She has worked in the corporate arena for fifteen years (Communictions) before she began her career as a writer.

The Shenanigans of Time is her debut novel. Poonam lives in new Jersey wither husband of 32 years and two extraordinary children. 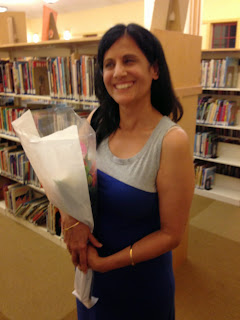 Excerpt from: Chai for his sister


Now came the hard part. He had to let go his cane, and carry the tray back to her room. It did not feel too heavy at first but the act of turning around with the tray, made the teacups slide a bit and he realized, his heart sinking, he had not added napkins to the tray. What if the tea spilled…the thought made him nauseous. After all his work, to bring her a cup of tea making dirty brown rings in the saucer, like a clumsy, irreverent peon. He gripped the tray hard and walked carefully his tongue sticking out between pursed lips. Halfway through, his right toe got caught in his pajamas. He had the urge to empty his bladder. He stood still, unfurling his toe waiting for it to come unstuck. He should have tightened his pajama string before he picked up the tray. By now his forehead was gleaming with sweat threatening to trickle down his eyes. A few more steps and he was at her door.

She seemed to sense his presence and stretched and sighed. His elbow nudged the corner table by the door. Ah! Perfect. He would place the tray on the table just for a moment. She was now awake and looking at him wide eyed. “Chai” he smiled shyly.

She sat up painfully, making a cursory attempt to push her wispy hair in place under the thinning braid. “Rosa?” She queried, perplexed.

“She will be in later.” He placed the tray beside her and sat at the edge of the bed. She held out his cup. Together they sipped their tea.

“Is it all right?” He asked after a while. She smiled at him, her eyes wet, her lips trembling. He put his head down. Why get used to that look in her eyes? She was only here a few days.

She ate a tea biscuit, then another. Wiped the crumbs from her lips and said, “Remember Ram Singh? I was so afraid of him…he looked like a monster to someone my age, with his moustache like a scrubbing brush, his deep voice …” Ram Singh was an old family servant, back when they were children.

Her brother nodded, listening as she prattled on, letting the words tease the air, play in his ears wash over him like water in the desert heat. Now and then he nodded, led the conversation down another alley, deliberately transposed dates, killed off living relatives, conflated events then acted surprised as she corrected him, the twinkle in her eyes and sharp curving lines around her lips making her otherwise featureless face come alive with pleasure. “No no don’t you remember…. you were in Quetta at the time, trying to persuade our father to let you join the film industry … ”

Like a child who sucks and sucks and sucks at a mint, willing himself not to allow its inevitable escape into the blood stream, the 87 year old brother let his sister, two years younger, talk about the things she liked to talk about, an endless number of times.

Available: the Shenanigans of Time is available on Amazon in paperback and Kindle formats.