I love to read books about two lonely people unexpectedly forced to spend time together. She gets lost. Maybe he offers her a ride to the nearest phone, then takes the wrong road and his car breaks down. Does a sudden storm comes up? A mudslide? When the river floods and cuts them off from everyone else, they seek shelter in a summer cabin. Does she winds up in his arms?

The heroine of Christmas Eve does. A little-known ski area on Mount Charleston, right outside Las Vegas, Nevada is the setting for my novel. Eve Adore backs her car into a ditch in a blinding snowstorm. A handsome stranger takes her in. His modern cabin is cozy and she soon forgets the cold wind and the snow piling up in deep drifts outside. The two of them might as well be the only people left on earth. No one will know how they spend their time. A romantic dinner? Dancing by firelight? No one need ever know she climbed in bed with Nick and heated up his cold sheets. 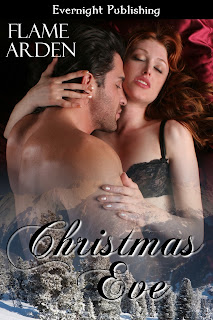 Here's an excerpt from Christmas Eve:


Finally. Nick St. Clair took one last look around. Everything seemed in order. Don't let your irritation at your hired date's tardiness show. She might have a reasonable excuse for being late.

Straightening the lapels of his hip-length robe, he crossed to the door. Beneath the robe, black silk pajama pants provided minimal warmth but kept him decent.

"I'm sorry to disturb you," the statuesque woman on his porch said with a bright smile, "but I've done something really stupid and wondered if you—"

"Don't just stand there." Nick opened the door wider, anxious to see what his credit card had purchased this time. "Come in."

"Thanks." After a slight hesitation, the woman stepped gracefully inside. Ice crystals clung to the fine wool scarf wrapped loosely around her neck, and to her stylish boots. She was all bundled up in a long coat, but Nick's mind's eye had no difficulty sketching what he hoped was hidden underneath.

The lady wore far too many clothes.

"I'm afraid my boots are wet." She glanced first at him. His welcoming smile seemed to stun her. She stared at her boots. "Where would you like me to stand?"

"By the fire." Nick indicated the hearth. "You look frozen." Although in need of a woman, he had no desire to bed an icicle. He wasn't that desperate. Yet.

She crossed the room at a slow pace, her fluid movements an aphrodisiac to him, although each tentative step left behind a patch of melting ice. Sex-deprived man that he was, his living room suddenly felt too warm. Things were looking up.

"I've been busy on the computer," he said, surprised by the sudden gruffness of his usually smooth voice. He joined her before the fire. "I hadn't noticed it had begun to snow."

A soft-looking, hooded leather coat covered her to her ankles. What lay beneath all those layers?

To his surprise, the unknown whetted his appetite. "Here, let me help you out of that coat."

No? Her response drew Nick up short.


Flame Arden speaks like a well-bred Southern lady. Nothing could be further from the truth. She claims to write sex scenes with ‘squirm factor’. You be the judge as she opens the boudoir door to one-man, one-woman relationships and gives you a glimpse inside. A happy and long lasting marriage has prepared her to write sizzling love scenes, and she doesn’t disappoint.


In a blinding snowstorm on Christmas Eve, the jaded owner of a posh Las Vegas casino mistakes the stranded real estate agent at his door for the classy call girl he's expecting to heat up his holiday.

Passions ignite. Eve has learned men believe bedding her the most direct route to her wealth. Nick's female companions want the keys to his Ferrari and to his safe deposit box, never to his heart, so he distrusts the entire lot and expects to simply walk away unscathed when his brief time with Eve ends.

Neither expects to give marriage a try, but hearts have a way of going where cautious souls refuse, and after screwing their head off for six days and night Nick and Eve discover without love their former lives were little more than empty shells.