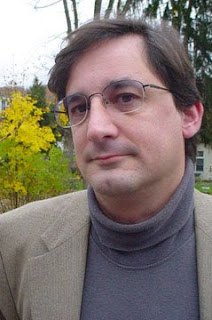 Say Hello to Michael A. Ventrella. I had the opportunity to sit near Michael at a writer's meeting in July. He answered my call when I asked for guest bloggers to be interviewed. To learn more about Michael visit his website.

I love high fantasy – magic and monsters and adventure. I wanted to write a book that I would like to read.

Years ago, I created one of the earliest live action role-playing games in America, now known as The Alliance (www.AllianceLARP.com, with chapters all over the place). The world in which the game takes place has been developed for over 15 years, and I didn’t therefore have to start from scratch.

However, I pretty much threw most of the rules out the window when writing my novels; what works in a game is terrible for fiction and vice versa. People who have read the book have no idea it is based on a game, and that’s exactly what I want.


Do you plot or do you write by the seat of your pants?

Everything is definitely plotted out in detail. I can’t imagine making it up as I go along.

In ARCH ENEMIES the main character Terin is thrown into the adventure when people are convinced that he is the one named in an unclear prophecy. In the soon-to-be-published THE AXES OF EVIL, there are three separate prophecies that contradict each other. Of course, by the end of each book, he has discovered a way to make them all come true.

That would be impossible without outlining it in detail. As with any mystery, you have to know before you begin writing what the truth is, and then you have to make sure all the hints are artfully placed so that by the end, all the pieces of the puzzle are on the table just waiting to be matched.

ARCH ENEMIES was the first novel I ever wrote, although I’ve been writing for years – just not fiction.

In the 1980s I tried sending some short stories to magazines but they were rejected and in retrospect they weren’t very well written (even though the ideas were fine; I may try rewriting them some day). I’m sure if I had tried writing a novel in the 80s it would have been rejected as well.

Writing, like any other skill, requires practice. Those writers who have their first novels published when they are young usually have been writing since they were 12.

Don’t be so anxious! I made the mistake of being so excited about my book that I sent it out to publishers after the first draft. As you may expect, I collected many rejection letters. Going back and re-reading it, I realized that I would have rejected it too. It needed a lot more work. It wasn’t until I felt it was really ready that I resubmitted it, and this time it was accepted and published.


If you could ask your readers one question, what would it be?

Are you now or have you ever been a member of the communist party?

Oh, sorry. Seriously, I like to ask my readers what they liked best and worst about the book. It’s interesting to see how their answers differ. Some like the characters and the way they interact with each other; some like the twists and turns and surprises in the plotlines; some like the humor. I always like to get feedback over what works and what doesn’t.

I’m a trial attorney in real life. I recall back in law school that one of my professors said “Words are your tools!” And she was right. I have been writing briefs and speeches to be made to juries for years, and my writing improved over time.

ARCH ENEMIES is a fast paced adventure in which, unlike many fantasy books, the hero does not become the world’s greatest fighter, defeating his enemy in an epic battle. Instead, his character evolves and matures and wins by figuring out the mysteries that surround him.

Now, don’t interpret that to mean there isn’t an epic and dangerous final climactic battle and confrontation which places him in terrible danger!

Although it is marketed as a Young Adult novel, it certainly is not childish in any way; in fact, based on the emails and reviews, I think more adults have read it and enjoyed it than teenagers.

Reviewers have commented on the surprising plot twist, the character development, and the humor. Excerpts from reviews can be found on my web page (www.michaelaventrella.com).

The sequel, THE AXES OF EVIL, is in the editing stages currently and is scheduled to be published in early 2010.


What do you consider your strengths in terms of your writing?

Well, two things: Interesting plots, with unexpected twists; and believable characters who act like real people would act when fantastic things happened to them.


What do you consider your weaknesses?

OK, not really. I run a law office and a nationwide live role-playing game, attend many science fiction conventions as a guest, participate in the Bar Association functions in the community, volunteer for political campaigns, play music, and otherwise always have a hundred projects going…

But writing is work. It really is. Coming up with the ideas and developing the outline is fun, but forcing yourself to sit at the computer and write isn’t that enjoyable.

Finishing it is tremendously enjoyable, but getting over that first hump of saying “All right, it’s time to sit down and write” is difficult for me.

I like characters. Plot and action are exciting, but if the character hasn’t changed from the experience, what’s the point? My favorite writers tend to emphasize not just the story but the experience.

Then again, the skill of writing is also tremendously important. Ideas are meaningless if not well related. Some writers are so talented that they can keep you transfixed even though not much is happening plot-wise.

A quick list of some of my favorites would include Neil Gaiman, JK Rowling, Charles Dickens, and Orson Scott Card… I’ll stop there or else I’d be naming hundreds.

When a cowardly young bard is called before the Duke and told that he must perform a task because of an ancient prophecy involving a mysterious Arch, he is certain there has been a grave mistake. When the Duke’s own men later try to kill him and he is forced to go into hiding, he realizes that it may be his own grave that is in question.

“Arch Enemies” is an exciting adventure in the vein of the “Harry Potter” novels, as our young hero struggles to overcome his inexperience and limitations to figure out the meaning of the mysterious prophecy. His only friends along the way are two squires who are torn between obeying the orders of the knight they have sworn to follow and doing what they believe is right.

Great interview. As I say often, I love seeing how authors work and get their ideas from. The books sound wonderful and I'm going to pass them on to my sister, who is a huge Sci-Fi/Fantasy fan.

And I liked the comment "people who get published the first time have been writing since they were 12." It makes me feel better about my road to publishing....lol.

And no, I am not nor have I ever been a member of the communist party.(though some may still question that, given some statements I tend to make..lol)

I'd never heard of Michael before today, but his writing sounds like the kind of thing I like to read!

Hey, thanks for the nice comments!

Congratulations on your book, and best of luck with your next! As your younger brother and maybe, hopefully soon to be author (of a different kind of book) I've appreciated all your suggestions and advice over the past year. I'm learning that in order to achieve the level of self-discipline required to pull it off, you need an enormous amount of self-discipline.