Author Betty Webb joins me today. She has written her own post. Let's see what she has to say.
Guest blogger, Betty Webb, author of the Lena Jones mystery novels

“Writing is easy. You just sit down at your computer and open a vein.”
I can’t remember who said that, but it sums up my writing life perfectly. Ever since I began working as an advertising copywriter 30 years ago, writing has always been that “easy” forme, so I’m amused when people look at my 10 novel (so far) turnout and say, “Wow, I wish writing came as easy to me as it must have for you!”
To sum up my career: after working on Madison Avenue for several years, I moved toArizona, where -- in addition to my work in advertising -- I began freelancing articles on the artsfor a daily newspaper. Several years later, that newspaper -- the Pulitzer Prize-winning EastValley Tribune -- offered me a full time (50 hours a week!) job. I left advertising then, and stayed with t 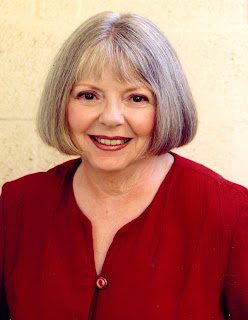 he Tribune for 15 years, during which I also wrote four mystery novels featuring private investigator Lena Jones: Desert Noir, Desert Wives, Desert Shadows, and Desert Run.
In a fortunate turn of events, Lifetime TV optioned Desert Wives, a mystery set inside one of Arizona’s many polygamy compounds, for a series and made-for-TV movies. Now, in order to write all those books and still work at the paper, I crawled out of bed every day at 4 a.m. and wrote until 8 a.m., when I got ready for work. On Saturdays and Sundays,I wrote all day long. Yep, writing is “easy.”
With the sale of Desert Wives to Lifetime TV, I was finally able to retire from the newspaper. I quickly learned, however, that I was still waking up at 4 a.m., ready (if not exactly thrilled) to write. With all that extra time now on my hands, I began reviewing books for MysteryScene Magazine, and also embarked on a new mystery series -- the humorous Gunn Zoo books, debuting with The Anteater of Death, to be followed in September 2010 with The Koala of Death.
These are humorous mysteries, in which Theodora “Teddy” Bentley, a California zookeeper, solves crimes.There was no way I could abandon my beloved Lena Jones, however, so I also turned out Desert Cut, Desert Lost, and have just begun work on Desert Wind. Publishers Weekly called the Lena Jones books “Mysteries with a social conscience,”because their plots center around situations I have found -- through my background as a journalist-- to be rife with social injustice. The most famous of these (at this time, anyway) was Desert Wives, in which I proved through research and interviews that polygamy is not the freedom o freligion issue its practitioners claim it is, but a cynical Welfare scam. Here’s the way it works.
By the forced breeding of girls as young as 13 -- making them have a baby a year until they hitmenopause -- the polygamy prophets guarantee themselves an ever-growing crop of illegitimate children. Illegitimate children receive Welfare checks, but the mothers of these children never see the money. Instead, the polygamy prophets use the Welfare checks to finance their own jet-owning, Cadillac-driving lifestyle. To my delight, the facts and figures that I included in thebook’s Authors Note helped influence the Arizona Legislature to enact Arizona’s first lawagainst polygamy. No more Welfare checks for the prophets -- such an ever-increasing series of SSI checks, because the polygamy compounds are now so inbred that fully 65% of all babies born on the compounds have serious birth defects.The “easy” part of writing Desert Wives? Three years of research, which includedconstant trips up to the compounds, and interviews with polygamy runaways.And yes, I have received death threats. Desert Lost, released on December 5 of this year, looks at polygamy again -- but this timefrom a different perspective. If one man can have 10 wives, then 9 men will have none. Whathappens to these 9 “surplus men”?The answer is simple. The polygamy “prophets” force them out of the compounds,beginning when those “surplus men” are as young as 13. That way, the prophets and their most trusted insiders can keep adding young girls to their harems.
Private investigator Lena Jones hates the polygamy prophets, especially since murder seems to follow in their wake (as it does in real life). Desert Lost follows Lena as she investigates the beating death of one of the polygamist“sister wives,” as the multiple wives of polygamists are called.
Desert Lost has been greeted by what can only be called rave reviews. Booklist gave it a starred review, saying, “This is a complex, exciting entry in a first-class series, and it makes an excellent read-alike for Sue Grafton fans.” Publishers Weekly followed with “Clear-cut characterizations help a complicated plot flow smoothly. As Webb points out in a note, polygamy still spawns many social ills, despite the recent, well-publicized conviction of Mormon fundamentalist prophet Warren Jeffs.”
Desert Lost was even hailed on the Huffington Post for itscontribution to human rights.Again, Desert Lost was “easy” to write. All it required was two more years of travel and research, plus those 4 a.m. mornings, fingertips bleeding into my computer keys. And I am awaiting renewed death threats from enraged polygamists.Given the chance, would I put myself through all that again? Hell, yes, I would.

To read more about Betty’s mystery novels, check her website at http://www.bettywebb/-mystery.com and her blog at http://bloggingwebb.blogspot.com/
Gotta say the whole idea of polygamy chills me. Thanks Betty for bringing it to the forefront.
cmr

Thanks for joining me today Betty!
Posted by Chris Redding at 11:13 PM