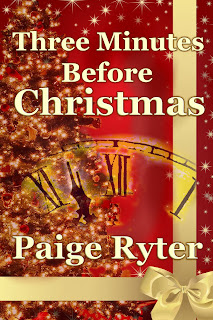 Today Paige Ryter shares an excerpt. What an ingenious pen name!
Anyway the book is called Three Minutes Before Christmas.
I'm usually asleep then, but that's cool.
The excerpt:
The electricity pulsing through her fingertip was incredible, making her heart race and her breath quicken. "I'm seeing how crazy you are," she whispered, moving her finger along his jaw line.
"No, you're playing chicken to see which one of us gives in first. I think it's going to be you."
"Really?" she whispered in a low tone. She inched closer so she could feel his hot breath on her face, melting her from the inside, then shifted in her seat to get as close to him as she could.

"How long can you hold out?"
"I'm not sure. It's tough, because you're beautiful and such a fun person. You have no idea what you do to me, which I find very interesting."
Her voice was just a whisper. "Just don't lick my nose, or I'm outta here." She threw her left foot over the gearshift and onto his right leg, stroking his thigh with the inside of her knee.
He grinned and began massaging the inside of her upper leg, inching higher and higher. "Your nose was the last thing I was thinking about."
She slightly licked her lips and narrowed her eyes in a seductive move. "You're still adorable, with your sexy eyes and strong cheekbones."
He wrapped his arms around her and moved his face to within inches of her lips. She touched his chin with a grin, then caressed his cheek with the back of her fingers, keeping her eyes on his. "You look like a model—"He brushed his lips against hers then backed away.
"You just lost," she whispered.
"No, this is losing." He moved forward and captured her lips with a huge kiss. Their tongues entwined, the warmth filling her entire body. Her breathing grew shallow and she was sure he was enjoying it as much as she was just from his actions. She lost all sense of where she was, concentrating just on what was happening between them. Her stomach fell and she felt tingly all over, making her more than lightheaded. Thoughts of him in bed filled her mind, even though she knew it could never happen.
While he nibbled on her neck and ear, she threw back her head in enjoyment. "I think you're right. You lost. Feel free to lose any time."

When Sydney White is hit by a huge roll of Christmas wrapping paper at her mall wrapping job, sexy pediatrician Colin Taylor rushes to her rescue. Since she can't find her purse or keys and can't even recall the phone number for her brother's new home, Colin offers his home as a place of refuge after a hospital stay. While there is a physical attraction, Sydney knows their worlds are far apart and it'll only be a matter of time before he finds someone else in his own social class, since his female coworkers seem to throw themselves at his feet.From Colin's perspective, Sydney is exactly what he's been looking for to fill a hole in his heart, created by his dead fiancée from years before. She's brought laughter into his home and warmth to his heart. But can he let go of the past to try to love again?Can a Christmas miracle save their love? Check the clock because they've only got Three Minutes Before Christmas until the magic is lost.

Website: http://www.paigeryter.com/
Buy link: http://redrosepublishing.com/bookstore/index.php?manufacturers_id=249
Thanks for helping me out of a crunch Paige. I wish you the best of success.
cmr
Posted by Chris Redding at 11:59 PM

Thank you, Margaret, and thank you, Chris!!! This is like an early Christmas present! YAY!!!

Have a super day today!