Derringer Award winning author Earl Staggs has seen many of his short stories published in magazines and anthologies. He served as Managing Editor of Futures Mystery Anthology Magazine and as President of the Short Mystery Fiction Society. His novel MEMORY OF A MURDER earned thirteen Five Star reviews online at Amazon and B&N. His column “Write Tight” appears in Apollo’s Lyre at http://apollos-lyre.tripod.com/ and he is a member of Make Mine Mystery at http://makeminemystery.blogspot.com/ He hosts a Workshop for the Muse Online Writers Conference and is a frequent speaker at conferences and writers groups. 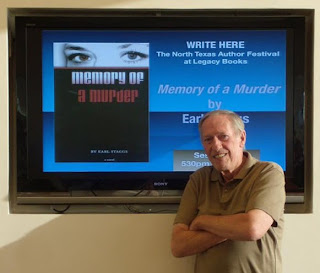 I was fifteen. My English teacher told me I had a talent for writing and encouraged me to enter an essay contest. I entered and won. Because of that, the desire to be a writer found a quiet corner in my mind and lingered there for a long time.

2. How long have you been writing?
Although I dabbled a little over the years, I didn’t give it a real effort until my wife and I burned our snow shovels, left the snow and ice of Maryland winters behind, and moved south to Florida. That was 1995, and that’s when I seriously started writing.

Once we were settled in Florida, it occurred to me that if I wanted to write I should learn how. When I signed up for a writing class at the community college, it happened to be about mystery writing. Perfect! My reading preference had always been mystery and that’s what I wanted to write.

On the first night of that writing course, the teacher said each of us would write a short mystery story by the end of the class. I decided for my short story, the protagonist would be a private investigator. To make him a little different from all the other PI’s out there, I gave him psychic abilities. When I finished the story, I was so proud of it, I submitted it to three major short mystery magazines. All three rejected it. I was crushed. Once I got past being rejected and crushed, I put that failed attempt aside and wrote more mystery stories, without the psychic element, eventually seeing many of them published in magazines and anthologies.

4. What drew you to the subject of your novel, MEMORY OF A MURDER?

The novel grew from the short story I wrote in that writing class--in a roundabout way. One day years later, I pulled out that story and read it. Good grief! I realized with great humility how amateurish it was and how much I’d learned about writing since then. I still liked the concept, however, and rewrote the story.

When I sent it out this time, it was accepted and published by two magazines at the same time. The reaction to the concept and the protagonist, Adam Kingston, was so enthusiastic and encouraging, I decided to put him in a complete novel. The result was MEMORY OF A MURDER.

5. Did you encounter any obstacles in researching it?

Not really. I’d always had an interest in psychic phenomena. Luckily, when I began that writing class, a Psychic Fair was in town. I went to the Fair and talked with a number of them. I wasn’t interested in the ones who read palms or tell your fortune, but in those who had a genuine gift and used it to assist law enforcement agencies solve crimes. I learned a great deal about how they used their gift and that, when not using it, they lived fairly normal lives. I modeled Adam Kingston and the use of his psychic gift after them.

6. What was the best writing advice someone gave you?

I attended a lecture given by an established novelist who said, “Follow your instincts.” In the beginning, like most novice writers, I spent time learning the Rules of Writing. I felt I needed to know what I was allowed to do and not do. From that simple advice, however, I realized you should learn the so-called Rules, but keep them by an open window so you can toss them out if your instincts tell you something outside the rules is better for what you’re working on at the time. If you want to do something different, something that goes against the so-called Rules of Writing, leap right in and try it. There is only one Rule of Writing that is set in stone, engraved in granite and carved in cement: “Whatever works best. If you can write it and make it work, it’s right.”

7. Do you outline or do you write by the seat of your pants?

I’m definitely a pantser. When a story idea comes along, I let it bounce around between the ears for a while and develop in my mind a general idea how it’s going to go. Once I begin the actual writing, however, the characters take on a life of their own and pretty much dictate the story to me. I’ve tried outlining in advance and I know it works well for some writers, but I can never stick with it for long. As the story develops toward the denouement I’m after, there’s an excitement in not knowing exactly what’s going to happen on the next page.

After I retired from a long career in sales, I tried staying home but didn’t like it. I like having to get up in the morning and having to go somewhere and do something. I also like interacting with other members of the human race on a regular basis. It took a while, but I found the perfect part time job for someone like me. I drive a school bus. It takes a couple hours in the morning and a couple in the afternoon and leaves the entire middle part of the day free for my writing. It helps that I like kids, of course. It also helps that I have the patience to endure them while they do their job, which is to see how much mischief they can get away with when the bus driver isn’t looking.

9. What do you consider your strengths in terms of your writing?

I think I’m strongest when writing action and I include dialogue under the heading of action. Dialogue is the act of people communicating with each other. When I write, I visualize the scene playing out in my mind like a movie. I see the characters doing things and talking and find it easy to write what I see.

10. What do you consider your weakness and what strategies do you use to overcome it?

Descriptions are difficult for me. Whether I’m describing a character or a setting, I struggle. I want the reader to see it as I do, but I also want to do it in as few words as possible. Many readers become bored with long passages of narrative description. My strategy to overcome the problem is simple: practice. I observe people wherever I happen to be and, in my mind, think about how I would describe them. I see a particular object or setting and do the mental exercise of describing it. It helps, but it’s still not easy for me.

11. Which authors had the most influence on your own writing?

As a young man, I read a lot of Ernest Hemingway and O’Henry. I admired Hemingway for his use of lean, strong language. O’Henry appealed to me because he often wrote about ordinary people in extraordinary situations and how they dealt with it. O’Henry also had a way of bringing all the elements of his stories to an ending filled with irony and poignancy. I’m not all surprised when I see influences of both of them in my own work.

12. How would you describe your book?

First and foremost, it’s the kind of book I like to read—a solid whodunnit. When I read, I enjoy trying to figure out who dun what right along with the protagonist. If I do, of course, I lose interest. I’m happy to say, so far, no one has figured out the mystery in my book before it’s revealed in the last two chapters.


Adam’s psychic images sometimes steer him in the right direction, but just as often, are so enigmatic and confusing, they only confuse him. That’s how it is with real-life psychics. As Adam explains in the book, “It’s not an exact science.” It always comes down to old fashioned police work. Adam’s former experience as an FBI Agent comes in handy for him. I actually wrote a version of MEMORY OF A MURDER without the psychic element, but it wasn’t as interesting or as much fun, so I put it back in.

The book is also about the value of family, friends, and memories. In helping his client get past a terrible loss and move forward with his life, Adam comes to realize he needs to do the same.

Thank you, Chris, for allowing me to visit and talk about my work and my book. If anyone would like to read the first chapter of MEMORY OF A MURDER, they can find it at: http://lifeloom.com/III1Staggs.htm

MEMORY OF A MURDER is available through bookstores or online at Amazon and B&N. For a signed copy, write me at earlstaggs@sbcglobal.net
Posted by Chris Redding at 11:01 PM