ExcerpTuesday -It's Murder My Son

Lauren Carr shares a piece of her latest It's Murder, My Son.


What started out as the worst day of Mac Faraday’s life would end up being a new beginning. After a messy divorce hearing, the last person that Mac wanted to see was another lawyer. Yet, this lawyer wore the expression of a child bursting to tell his secret. This covert would reveal Mac as heir to undreamed of fortunes, and lead him to the birthplace of America’s Queen of Mystery and an investigation that will unfold like one of her famous mystery novels.

The sitcom was senseless. That didn’t matter. Katrina was too tense to handle anything with depth. The hot bath and martini had failed to soothe her nerves. She ran the water until steam filled the master bathroom.

The weather channel had predicted that the severe winter storm would hit around midnight and continue through the next day. Spotting storm clouds on the horizon, Katrina anticipated waking to white-out conditions. Buried in a thick white blanket would be her last memory of Deep Creek Lake.

After a long soak in the tub, Katrina slipped into her red silk bathrobe and combed out her long black hair. Tenderly, she rubbed the most expensive anti-aging moisturizer over each inch of her olive flesh.

Her beauty had earned her millions. That made it worth preserving at all costs.

Time for a third martini before bed. She wondered if she would hear from her husband before she fell asleep. He had told her that he would be working late in the city.

Like I don’t know what you’ve been working late on. Go ahead. Get snowed in with Rachel for Valentine’s Day. Enjoy it while you can.

After completing her nightly beauty routine, she returned downstairs to the home theater where she got sucked into a verbal exchange between a husband and wife about their teen-age son’s sexy girlfriend.

A noise outside made her jump out of the recliner.

She glanced at the clock.

Almost nine. Could Chad have decided to come out when I mentioned my appointment with the divorce lawyer? Maybe he does love my money more than he loves Rachel.

She listened. Nothing except the wind signaling the blizzard’s approach.

Maybe I should call David? No. It wouldn’t look good if Chad found him here. He’s already suspicious.

The German shepherd began scratching at the back door.

Not again, you damn dog! When you aren’t wanting out or in, you’re digging up the back yard.

With a groan, she pulled herself out of the recliner and let the dog out onto the patio. As long as she was up, she poured herself another martini and admired her reflection in the mirror behind the bar before returning to her seat for another sitcom.

Her mind sucked in by the television, Katrina was un-prepared to fight when her killer attacked and pinned her down by her throat.

“Did you really think I was going to let you leave?” she heard through the roar in her ears while gasping her last breath.

A most unusual and surprising plot, intriguing characters, snappy dialogue, great settings and a dog named Gnarly are the prime ingredients in Lauren Carr's terrific new mystery, It's Murder, My Son. --F.M. Meredith, author of An Axe to Grind.


With it's tight plot, well-crafted and believable characters, and complex mystery, It's Murder My Son is a thoroughly enjoyable read. I look forward to many more Mac Faraday mysteries. -- John J. Lamb, author of the Bear Collector Mysteries 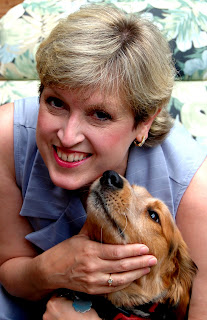 Lauren Carr fell in love with mysteries when her mother read Perry Mason to her at bedtime. The first installment in the Joshua Thornton mysteries, A Small Case of Murder was named a finalist for the Independent Publisher Book Award 2005. Her second book in the Joshua Thornton series, A Reunion to Die For was released in June 2007. Her new series, The Mac Faraday Mysteries, is set in Deep Creek Lake, Maryland, where she and her family often vacation. She lives with her husband, son, and two dogs on a mountain in Harpers Ferry, WV.
Posted by Chris Redding at 11:14 PM