Thank you so much, Chris, for inviting me to guest on your blog in celebration of the North American release of my ecclesiastical thriller A VERY PRIVATE GRAVE. Since it released in the UK in June the wait until September has seemed very long so I’m ready to celebrate! Tea and truffles, anybody?

1. How did you pick the genre you write in?
I hope it doesn’t sound too cliched to say that the genre, or really subgenre, chose me. I have written in many genres: romance, historical, mystery, children’s, cookbooks, plays, nonfiction. . . But when it came to telling the story of St. Cuthbert’s strange journey the ecclesiastical thriller just seemed to fit the adventure I wanted to share with my readers.

Because my stories are always heavily based on my research, and my research in England is 7000 miles away from my home in Idaho, I have to have a pretty good grasp of what places I’m going to need to visit before I set out. The story unfolds from there. In the case of A VERY PRIVATE GRAVE because Felicity and Antony have to follow the trail of St. Cuthbert’s posthumous journey to find and rescue the treasure amassed around his relics, the general outline of my plot was set centuries ago.

3. What drew you to the subject of A VERY PRIVATE GRAVE?

I first visited the magical cathedral city of Durham 25 years ago as a side trip to other research I was doing. As soon as I heard St. Cuthbert’s strange story I knew I wanted to tell it. I had actually signed a contract to write this book (something similar) three times before it took its present shape and found a home with Monarch Books. One time my editor moved, another time the contrct was unacceptable, another time we decided to go ahead with a different story. But always I wanted to tell this story.

4. What was the name of the first novel you wrote?

My first novel was BRANDLEY’S SEARCH an historical romance. Writing it was a wonderful experience because I got the character of Brandley in my head after reading Gerogette Heyer’s VENETIA. It was like being pregnant. That story had to come out. I wish all my stories would just present themselves like that. 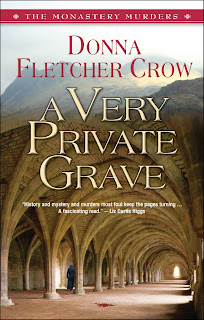 Did you try to publish it?
Oh, yes, but not until I had written several other books. I had to learn my craft and rewrite it about 100 times. BRANDLEY’S SEARCH became Book #3 in The Cambridge Chronicles and was later reissued as WHERE LOVE BEGINS.

The same advice I pass on to any beginning writer who asks me: Write from your passion.

Felicity Howard, a young American studying for the Anglican priesthood at the College of the Transfiguration in Yorkshire, is devastated when she finds her beloved Fr. Dominic brutally murdered and Fr. Antony, her church history lecturer, soaked in his blood.

A Very Private Grave is a contemporary novel with a thoroughly modern heroine who must learn some ageless truths in order to solve the mystery and save her own life as she and Fr. Antony flee a murderer and follow clues that take them to out-of-the way sites in northern England and southern Scotland. The narrative mixes detection, intellectual puzzles, spiritual aspiration, romance, and the solving of clues ancient and modern.

7. What do you consider your strengths in terms of your writing?

Background is one of the most important aspects of a novel to me, whether I’m reading or writing. I always look for well-developed backgrounds in interesting locations when choosing a book and I try to deliver that to my readers. I try very hard never to write about a place I haven’t actually visited. Then I try to share that experience with my readers by giving them a “you are there” experience.

Plotting is always the hardest thing for me when writing and the thing I find least memorable when reading. I once told an editor that and said, “I suppose I should read more thrillers.” He ardently agreed and sent me a box of books by John D. MacDonald to get me started. I continue to read good mysteries to get my own creative juices flowing. I also cheat a bit by using historical events as often as I can, so I don’t have to make it up.

Dorothy L Sayers is my all-time favorite mystery writer, but I try to read widely in my subgenre of clerical mysteries: Kate Charles, Phil Rickman, Julia Spencer-Fleming, Susan Howatch. I have just discovered a wonderful new (to me) writer Andrew Nugent, an Irish Benedicting monk. I believe P. D. James has written the all-time best clerical mystery in her DEATH IN HOLY ORDERS.

10. What was your favorite scene to write?

To me a great deal of the fun of writing The Monastery Murders Series is going to be growing Felicity up. She starts out thinking she knows everything, which gets her into some very interesting spots. It gradually it dawns on her that she has a bit to learn. I love an early scene in Private Grave where she has discovered her flat turned upside down by, she assumes, some male, cassock-clad fellow ordinands:

Was this an anti-women-clergy thing? Had she underestimated the extent of the resentment? Or was it an anti-American thing? The American president was widely unpopular in England. Had he done something to trigger an anti-American demonstration? Felicity would be the last to know. She never turned on the news.

Well, whatever it was, she would show them. If someone in the college thought they could scare her off by flinging a few books around she’d give them something new to think about. She stormed out, slamming her door hard enough to rattle the glass pane and strode up the hill at twice the speed she had run down it, her mind seething. If those self-righteous prigs who posed as her fellow students thought they could put her off with some sophomoric trick— 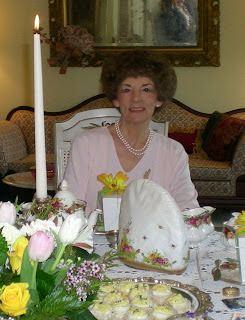 She approached the college building, practicing the speech she would deliver to all assembled for dinner in the refectory: “Now listen up, you lot! If you think you can push me around just because your skirts are longer than mine. . .”


Praise for A VERY PRIVATE GRAVE

“A Knickerbocker Glory of a thriller. At its centre is a sweeping, page-turning quest through the atmospherically-depicted North of England, served up with dollops of Church history and lashings of romance. Donna Fletcher Crow has created her own niche within the genre of clerical mysteries."

"History and mystery and murders most foul keep the pages turning in A Very Private Grave. Two scholars, Felicity and Antony, embark on an unusual spiritual pilgrimage, following the journey of Saint Cuthbert, even as they're pursued by friends and foes, who don't reveal their true colors to the very end. A fascinating read."

Donna Fletcher Crow is the author of 35 books, mostly novels dealing with British history. The award-winning GLASTONBURY is her best-known work, an Arthurian grail search epic covering 15 centuries of English history. A VERY PRIVATE GRAVE, book 1 in the Monastery Murders series is her reentry into publishing after a 10 year hiatus. THE SHADOW OF REALITY, Book 1 The Elizabeth & Richard Mysteries, is a romantic intrigue available on Ebook.

Donna and her husband have 4 adult children and 10 grandchildren. She is an enthusiastic gardener. To see the book video and pictures from Donna’s research trips go to www.DonnaFletcherCrow.com
Posted by Chris Redding at 11:52 PM

Hi, Chris, writing to you from ~Calgary--where it's raining. Thank you so much much for hosting me. I look forward to having yu visit us at Deeds of darkness; Deeds of light in a couple of weeks.