Vijaya Schartz, here. Like all French people, I love cooking, and this is my favorite recipe: FRENCH RATATOUILLE, from the south of France, Provence, to be exact. 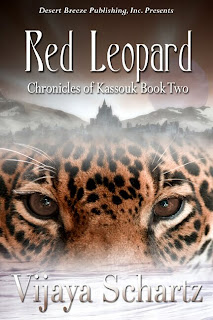 In a frying pan, pour olive oil and heat. Brown the diced sausage on medium heat.

In a large deep pan, pour some olive oil and sauté diced onions until golden.

Born in France, award-winning author Vijaya Schartz never conformed to anything and could never refuse a challenge. She likes action and exotic settings, in life and on the page. She traveled the world and claims she comes from the future. Her books collected many five star reviews and literary awards. She makes you believe you actually lived these extraordinary adventures among her characters. Her stories have been compared to Indiana Jones with sizzling romance. So, go ahead, dare to experience the magic, and she will keep you entranced, turning the pages until the last line. Find more at http://www.vijayaschartz.com

In charge of the fortress of Kassouk in the King's absence, what is Terek to do when a Goddian spacecraft lands in his medieval backyard, and the striking woman leading the galactic party insists on colonization?

Galya, the Goddian Princess commanding the geological vessel, is bent on finding a crystal with unusual hyperconductor properties. And the futile resistance of the local population isn’t going to stop her. Not even that defiant tribal chief nicknamed Red Leopard, like the infernal feline that follows him everywhere.

Terek and his band of swordsmen and felines must defend their people’s freedom, no matter the cost. But with this unexpected arrival, an old prophecy surfaces, taking new meaning and carrying a new threat...

When political intrigues, greed, murder and betrayal tip the scales, whom can Galya really trust? Her fellow Goddians? the Mutants bred to serve her race? or her primitive Human enemy?
Posted by Chris Redding at 8:47 AM

Oooh, love Ratatouille--the food and the movie! I just stopped by to say I'll be a little late replying to any guest comments on my guest post tomorrow because I'll be on a plane most of the day, but if anyone has questions or comments I'll catch up with you. Thanks ahead of time, Chris.

Sounds like a wonderful recipe! I'm wondering if I could possibly hit the right amounts of each ingredient without the measurements. But those are always the best recipes. Thanks for sharing this one.

Vijaya, this is something I've wanted to try ever since seeing the chef-mouse movie...thanks so much for making it possible!

Laurie, who can't even IMAGINE how you find time to cook as well as you write :)

Vijaya,
Sounds like a great receipe. I can't wait to try it. :)

I'm reading Red Leopard right now and I'm enjoying it very much. You've got a great writing style that I enjoy reading.

Vijaya you never cease to amaze me.

Sounds like a wonderful recipe, Vijaya. Only thing that sounds better is your latest release. So write on future-girl!

Thanks for all the comments. Like in most French recipes, the amount of each ingredient is to the discretion of the cook. It's difficult to measure vegetables anyway.