J. R. Lindermuth lives and writes in central Pennsylvania . A retired newspaper editor/writer, he is now librarian of his county historical society where he assists patrons with genealogy and research. He is the author of eight novels, including four in the Sticks Hetrick mystery series, and has published articles and stories in a variety of magazines, both print and on line. He recently signed a contract with Oak Tree Press for a novel in their new Western line. He is the father of two children and has four grandsons. 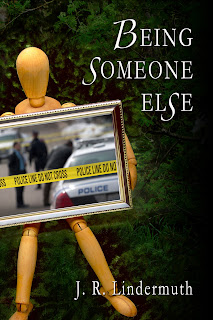 BLURB
When an out-of-state reporter is found murdered in the restroom of a disreputable bar the tendency to violence spirals in the rural Pennsylvania community of Swatara Creek, and the investigative trail keeps bringing Dan ‘Sticks’ Hetrick and his team back to the family of a wealthy doctor who has come back to his hometown in retirement.

See reviews and excerpt at http://www.whiskeycreekpress.com/chapters/BeingSomeoneElse_JRLindermuth.shtml

Q. When did you know you wanted to be a writer?
A. I think the desire was always there. I remember making up stories as I played with toy soldiers as a boy and coming up with scenarios for cowboy and Indian games with friends. My grandfather was a story teller and my Dad had a good library. I think both further stimulated my imagination.

Q. How long have you been writing?
A. I’m not sure just when I began committing my stories to paper. I recently found an old school notebook which contained some early (embarrassingly bad) examples. I know my output expanded greatly after my parents gave me a typewriter in high school. I began sending stories to magazines and actually got encouragement from a few kind editors. But it would be much later until anything was accepted.


Q. How did you pick the genre you write in?
A. My genres are mystery and historical fiction, both generated by my early taste in reading. I grew up reading the tales of Poe, the adventure stories of Robert Louis Stevenson and Jack London and the mysteries of Conan Doyle and John Dickson Carr. Though I now read a wide variety of fiction and non-fiction, my favorites remain mysteries and thrillers.

Q. Do you plot or do you write by the seat of your pants?
A. I’m definitely a pantser. I generally know where I’m going with a story, but if I have too-defined a road map I’ll get bored before I get there. My outlines are so brief no one else could follow them—usually just a scattering of words as reminders and to keep me focused.


Q. What was the name of the first novel you wrote? Did you try to publish it?
A. My first completed novel was The Spartans, a sort of Cain and Abel tale set during the French and Indian War in Pennsylvania . Fortunately, it was rejected by every publisher to whom I submitted. But elements of that novel—much changed and moved to a later period in history—made it into Schlussel’s Woman, my first published novel.

Q. What was the best writing advice someone gave you?
A. I’ve said this elsewhere, but I still believe it. Early on I wanted to be an artist. I wrote Thomas Hart Benton and asked his advice. He replied with one word: Paint. I believe the same applies to writing. We learn best by doing.

Q. What place that you haven’t visited would you like to go?
A. There are many, though Africa would top the list. Why? To see the place where man began. To see the great herds before they are completely exterminated. To see the places where some of my heroes walked.

Q. What other time period besides your own would you like to experience?
A. With a generous supply of today’s antibiotics, the Renaissance period, especially in Italy and England . Can you imagine a more interesting period in history than this when man was shaking off the fetters of superstition and questioning everything?

Q. What do you do when you are not writing?
A. I like spending time with family, reading, drawing, walking—especially in the woods and mountains around my home, listening to music, watching good movies.


Q. What would you like to learn to do that you haven’t?
A. Play some musical instrument, though I doubt I can do it. I love all kinds of music—from classics to the blues, from folk to early rock. Unfortunately, I can’t even play the radio without getting static.

Email ThisBlogThis!Share to TwitterShare to FacebookShare to Pinterest
Labels: Being Someone Else, Central Pa, J.R. Lindermuth, Murder, reporter

Hi JOhn, Very interesting as usual, you have lots of relevant things to talk about.

Thanks for commenting, Margaret.

I had to chuckle over your comment about how embarrassing it was to look back at something you wrote early on. I completely understand.

Your books sound interesting and I know that I'll have to try one.

Hi John,
Interesting blog. Sounds like you live amidst lovely surroundings,which must be great for inspiration, no wonder you write such great stories.

A rolling stone may gather no moss, but John R. attracts readers like a literary sponge. Being Someone Else, an other Lindermuth thriller that is worth the masterful read.

My poor father let me have piano lessons for years, but, John, I never learned a thing.

Great interview, John. Two of your comments really stood out for me: "if I have too-defined a road map I’ll get bored before I get there" - I know exactly what you mean! I love the way my characters lead me at times into something I hadn't even thought of!
And your advice "We learn best by doing" - so very true!