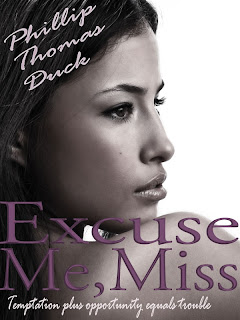 How well do you trust your partner?


“Fidelity anthropologist”, sexy decoy to most, Victoria Frost will discover the answers you seek…


The night it all begins to change for Victoria Frost is no different than usual. She spends it seducing another woman’s husband. Handsome, charming, intelligent, any woman would be attracted to Benjamin Kingston. Victoria eases up beside him and lingers there like too much perfume. And that quickly, for him, his wife is forgotten. The ensuing conversation is an erotically-charged game of cat and mouse. Where will it lead? In EXCUSE ME, MISS hurtling events and richly drawn characters collide in a sexy story of betrayal, the desire for loyalty, and the consequences of unfaithfulness. One woman’s determination to uncover the truth for badly broken wives instead unleashes a host of personal dilemmas, and in the end the truths she discovers are mostly about herself.


Excerpt from “Excuse Me, Miss”

THE NIGHT IT ALL began to change for me was no different than most. I spent it in the usual fashion, seducing another woman’s husband. The seduction took place at LOOK, an art gallery in Jersey City, New Jersey. Close enough to New York to carry some of the same sounds and smells, but a touch less frenetic. The art gallery immediately drew me in with brick walls painted chocolate, gypsum plaster walls painted a light cream, and a hint of cinnamon and vanilla in the air. Muted lighting, low key. I almost didn’t feel the usual pangs of guilt for what I was about to do.

I spotted Beverly Marie Kingston’s husband by a painting that took up most of a cream-colored wall. Age forty-five, but he looked a decade younger, the benefits of three days each week at an LA Fitness. He was cloaked in black slacks and an attention-seeking lime green shirt. Expensive leather shoes, Piaget timepiece, a diamond-encrusted platinum bracelet on his right wrist. He sipped at a glass of ginger ale, my favorite soft drink as it turns out, letting his shirt sleeve snake up his arm with each sip so all of the attractive ladies in attendance could catch the gleam of his jewelry and put two and two together: wealthy and content spending that wealth on a variety of gaudy and unnecessary items. What many women foolishly considered a good catch.

I headed his way.

When I eased into his personal space he glanced at me briefly but casually went back to admiring the art. There’d been a slight hitch in the gesture, though, and so I knew he was in play. I lingered there beside him, like too much perfume, before moving on. But even after I’d stepped away I wasn’t completely gone from his imagination. His mind was fixated, I’m certain, on the beautiful stranger in the form-fitting, red dress and three-inch heels. That quickly I’d become the muse in all of his fantasies. That quickly I had his nose wide open. I had experience with his type, so I knew this as fact.

love at first sight. As I expected, Beverly Marie’s husband sidled up next to me a moment later

with his lies carefully thought out.

Phillip Thomas Duck has written several traditionally published adult and YA novels. “Excuse Me, Miss” is his first foray into the self publishing ebook world. He resides in New Jersey with his daughter.