Today my guest is Steve Symes.


Steven Symes has written dozens of articles on a variety of paranormal phenomena, including hauntings. Steven grew up in , and attended college in and . He currently works as a full time writer of both fiction and non-fiction. Steven currently lives in with his wife, children and dog. Steven is busily working on his next novel due in 2011. 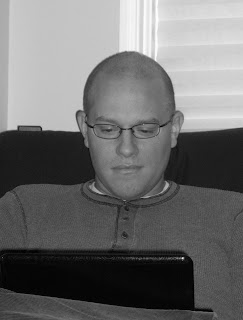 I have told stories since I first began talking, literally. I know all kids tell “stories” but I told big, complex stories. For example, once when I was about three years old I told my mom how I would have rewritten Star Wars: A New Hope. She was dumbfounded since my plot flowed well. She didn’t write it down at the time and kicks herself for not doing so. In any case, I wanted to direct movies until I hit the fourth grade. I had just finished reading the Chronicles of Narnia, among many other books, and decided I really wanted to write books.

Technically I have been writing stories since I learned to write. I used to write stories for my grade school classes just for the fun of it. I have a huge store of old stories I have never really shared with anyone, or with only a few people. I have only been sharing my fiction writing with the general public since January of 2010 and so far I really enjoy the experience.

I have always had a taste for the paranormal. At the age of six I was absolutely convinced a group of werewolves lived in my bathroom. In my teen years I wrote stories about vampires and samurais and the like. My imagination for the paranormal really caught fire in college when I took a couple of folklore classes and my awareness was greatly enlarged.

I am a habitual planner and strategist – just ask my wife what it is like to play strategy games with me. I usually spend a couple of months just prewriting and plotting for a novel. Despite that fact, once I am sitting in front of the computer it is me and the characters. I have had my carefully detailed plots completely altered by characters or by a gut feeling while I am writing, and so I go with it.

5. What drew you to the subject of Shadow House?

Haunted houses have always been interesting to me, having had some experiences of my own and having known quite a few other people who have lived in them. I live in an older house that was built in the 1940s and found all kinds of weird things in it. I admit at that time I was watching one too many horror movies and I said to myself “I can write a book about a haunted house that’s better than these movies!” and so Shadow House was born.

6. Tell me one thing about yourself that very few people know?

I actually enjoy a fair amount of “chick flicks.” I always protest when my wife wants to watch them, but some of them are actually pretty good. I just saw The Proposal with Sandra Bullock a few weeks ago and was pleasantly surprised. Some of my all-time favorite movies are Clueless (what a perfect adaptation of Emma!) and Legally Blonde. I am sure a lot of people would never guess I like those types of movies, but I do.

Overall I really like how I ratchet up the tension throughout Shadow House. More specifically, the preparation for and writing of the séance scene was a lot of fun, if not a little freaky. Come to think of it, when I was writing at night, I would constantly be looking over my shoulder since the book was creeping me out in parts.

8. What do you do when you are not writing?

Taking my dog Marshall on walks or runs, playing with my kids, hanging out with my wife, enjoying the beautiful outdoors in Utah, playing video games, watching old X-Files episodes or listening to music (I have a huge collection). I also do some art work on the side, and keep saying I am going to put some pieces up for sale, but so far I haven’t actually taken the time to find any buyers.

9. What would you like to learn to do that you haven’t?

I have had a strange fascination with playing the bass guitar ever since I was a teenager. I really love music that has a heavy or funky bass rift to it and really admire bass guitarists. I have no idea where I would fit in time to learn, and so my desire continues unrealized.

Everywhere but the shower, literally. I always carry a little notebook with me just in case genius flashes into my mind, which it regularly does.

Blurb:
Scott Bennett leaves behind a successful career as a New York City attorney and a marriage ended by violence for the promise of a new life in rural North Carolina. Scott buys his dream house – an old Victorian – not realizing why it has sat vacant for years. Things for Scott seem to be looking up when he meets a younger woman, Rachel, and a spark of romance ignites. Everything changes when Scott discovers a locked box and a matching key on his property. Against the advice of an old friend turned healer, Scott opens the box and awakens an old evil. Scott is forced to lean on a decaying web of support as he is relentlessly assaulted by the unseen. Questioning his own sanity, Scott fights hopelessly for his life and very soul.
Posted by Chris Redding at 11:00 PM

hey thanks for this share..i read steve symes novels..but seriously knowing the person in a writer is a great experiance..