I always feel weird when writing a post for another person’s blog. I’m grateful that I’ve been given the opportunity to blog but don’t know what the readers expect. I worry that I won’t get any comments since a lot of people don’t like change and here comes another author posting something totally random. But often I get to meet a variety of new people. Being a guest blogger opens up the opportunity for new connections I didn’t already have. This is one of the many joys of being an author. I get to meet so many different types of people. Who would’ve thought and eighteen year old guy would read Jesse’s Brother (my first novel) and send me fan mail? I certainly didn’t but loved getting to know him. 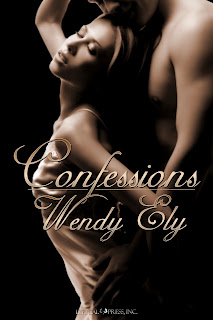 So setting up a blog tour was the first thing I did in my preparations of my new release. So, dear readers, take a peek at the Confessions excerpt and let’s chat on here for a bit. Or you can send me an email (wendy_ely@wendyely.info).

Jordan sat down on the couch and patted the floor in front of him. “Sit down. Let me get those knots out.”

She took a few steps in his direction, stopping out of his reach, afraid to let him touch her. If he touched her, then she’d fall madly in love with him all over again. That couldn’t happen.

She watched as he leaned forward far enough to grab her by the hand. He pulled her to him.

“Are you sure you want to?”

“Yes,” he said. He guided her down to the floor between his legs. Before leaning back, she slipped her t-shirt off, revealing the navy tank top. His strong hands slid over her skin and she sunk back against him. She’d forgotten how strong he was, how needy she felt when he touched her. As if by magic, her body slowly began to relax underneath his touch. He kneaded her skin with the palms of his hands. The more he touched her, the more she felt at ease. She leaned forward a bit, making his legs embrace the rest of her body. His hands trailed down the length of her back toward the top of her jeans. A small moan escaped her lips. If only he would go lower.

“Feel good?” The words floated through the air like music from a past dream.

He rubbed the small of her back, his hands working every muscle imaginable. “Remember when I would rub your feet each night after work?”

“The best part of the whole day.” His hands. His voice. He had cast a spell over her.

“I loved those times with you, Chels.”

Butterflies swarmed in her stomach, breaking up her intoxicated sensation. Chels? He used to call her that when they were teenagers. He was the only person who’d ever had a pet name for her.

“That’s what has gotten me through until now. Those memories of us from before you disappeared.” His hands stilled, but she could feel their heat against her.

Damn it! Tears welled in her eyes. He couldn’t see them, she wouldn’t allow him to. She scooted away him his touch, far enough away so she could stand up on her own without using his assistance.

“I’m sorry, Jordan. We shouldn’t be doing this.”

“What are you talking about, Chelsea?” He tried to grab her by the hand again but this time she walked away from him. She went over to the windows, dried her eyes and then turned around.

“I told you everything, so now I should go.” She walked past him toward the stairs.

“No, you won’t.” The words were ice cold. It seemed like his massage had been some sort of dream.

“Let’s get something clear. Okay?”

She slowly turned around. She had never heard this tone from Jordan in the whole time she had known him. It scared her.

He stood up from the couch and walked over to her. His hands jammed into his jean pockets. “There’s a choice to be made here,” he said. “You either stay here to help me locate my daughter or I contact the authorities.”

If you’d like to read more, you can find Confessions at www.lyricalpress.com/wendy_ely
Posted by Chris Redding at 6:40 AM