I can actually pinpoint the exact day and time when it happened (I can’t remember the specific date, but still…), because I’d just finished another great book (don’t remember the title, but I’m sure it was awesome). I stood up from the couch, and it hit me. I’ve been reading books for years. Why can’t I do this? I figured a lifetime of reading was some of the best preparation one could have to write, so that very night I started jotting down ideas for a story. What a fool I was. I had no idea what I was getting into.

That A-HA! moment happened in 2005, so it’s been around 8 years now. Though my novels have only been available for sale since last June. That should tell you how well those first 7 years went. 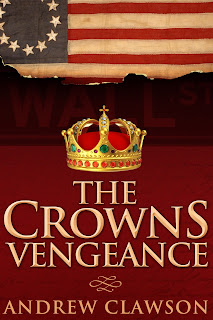 3. Do you plot or do you write by the seat of your pants?

One hundred percent a plotter. Before I ever start writing, I have the entire story outlined by chapters. Now, I’ll revise and edit the different chapter headings as the characters talk to me, as they dictate which direction to take. But for the most part, everything that is going to happen has already been laid out. I’ve found that setting a general path, complete with major turning points in the story, allows me to worry less about what’s coming down the road and just write. As any author will tell you, the hardest part of being an author is the writing.

4. What drew you to the subject of The Crowns Vengeance?

The global financial meltdown of 2008 is known to everyone, and I would have to thank the Wall Street geniuses who gambled with our money for this inspiration. I have a few close friends who are in the financial sector, and my father was a banker for several decades. With such wonderful resources close at hand, it wasn’t that hard for me to craft a (hopefully) convincing story set amidst a potential global disaster. Wall Street gave me the idea, my team of advisors gave me the knowledge, and I just ran with it.

5. Did you encounter any obstacles in researching it?

I had no idea how intricate the financial world is, and how difficult it can be for the uninitiated to navigate. Sure, I’d heard of speculation and could guess at the meaning, but to actually use it in a convincing and logical manner to craft a novel? Wow. So much harder than I realized. The amount of research I conducted into this book was on par with my first novel, A Patriot’s Betrayal, but it wasn’t like researching American history. This stuff was way more intense. Kind of like swimming through water vs. syrup. If you’re into that kind of thing.

6. What was the name of the first novel you wrote? Did you try to publish it?

My first effort was the aforementioned A Patriot’s Betrayal. I tried the traditional publishing route (write book, query agents, cry self to sleep), but gave myself a time limit. I decided that once I’d garnered 50 rejection letters, I was going the self-pub route. Why sit around waiting for a call that may never come when I could get my work out there and let the market decide if I was worthy? Anyway, you’d be surprised how quickly 50 people can say no. Once that final email arrived, I dove into the self-pub world and never looked back.

That just getting the darn words onto paper is the hardest part. Unless you are able to sit in front of a computer for 12 hours a day (and if you are, be thankful), it’s hard to find time to write. I’ve got a full-time day job, and sometimes the last thing I want to do when I get home is write for a few hours. I’ve learned that you need to set a schedule and STICK TO IT if you’re ever going to finish a novel.

Write every damn day. I forget where I first saw it, but hands down that’s the best.

9. If you could ask your readers one question, what would it be?

What didn’t you like about the book? I’ve found that criticism is far more useful for advancing my craft than praise. Though a few kind words now and again do wonders for motivation.

The Crowns Vengeance is an action adventure novel in the vein of a Steve Berry tale. I love history, and believe that I’ve been able to weave a tale in which the reader cannot tell where the truth stops and the fiction starts. This book will keep your pulse racing while educating you at the same time. The tale is rooted in history, and if the right people decided to do the wrong things, could be in tomorrow’s headlines. 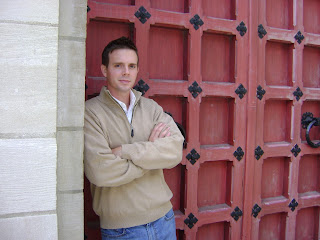 Andrew Clawson is the author of two books, A Patriot's Betrayal and The Crowns Vengeance. He lives in Pennsylvania, where he enjoys reading works of fiction and writing as much as possible. You can learn more about Andrew and his upcoming novels at his website, andrewclawson.com.

For 300 years, America has been under assault, the enemy silent, unseen. In the august halls of the Ivy League, a scholar uncovers shocking evidence of an unimaginable betrayal.

Professor Erika Carr uncovers a Revolutionary era espionage report, lost for centuries in a cache of Alexander Hamilton's private documents. Dr. Carr is stunned when she discovers the intelligence reports were authored by Paul Revere. A clue hidden within the message suggests a second missive exists, waiting to be found.

Parker Chase joins her on a journey that leads to astonishing revelations about a centuries old conspiracy to destroy American independence. On Revere's trail, they are attacked by a murderous syndicate of international powerbrokers intent on silencing them forever.

Running for their lives, Parker and Erika must outwit an invisible enemy while unraveling a conspiracy that stretches from the morally bankrupt halls of Wall Street to oil-soaked sands in the Middle East. Locked in a struggle for their lives, they fight to reveal an unthinkable secret, the fate of a nation hanging in the balance.

Posted by Chris Redding at 3:44 AM