Flying in Shadows (Book 2 in the Black Creek Series) Excerpt


Walking in the dark, Andy readjusted his tackle box. Moonlight shone on the dark ripples creeping down Black Creek. He spotted a raccoon as he crossed the bridge. Startled, the animal hissed at him. Andy stomped his foot and hissed back; he was in no mood for it. 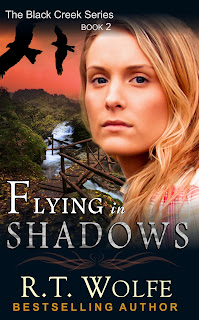 He saw movement in his peripheral vision. Larger movement. A man? The shape disappeared as quickly as Andy imagined it. When you let yourself get this worked up, you start seeing things, he chided himself.

What the hell had he been thinking when he decided to date Candi?

He would go over to her house first thing the next day to end it and all of the maintenance that came with her. Never again, he vowed. He would be more like his brother. Casual relationships. No strings.

But first, he needed Rose.

She would calm him down and lighten his mood, help him feel normal again. He looked at his watch and winced. What were friends for if you couldn’t count on them to be there? Even at this time of night. Or morning.


Rose slept soundly in her twin bed dreaming of her favorite spot at the zoo. In the small rain forest building, she allowed a newly emerged monarch butterfly to dry its wings on her apron while sharing facts about the insect to one of two visiting young boys. The other threw pebbles into the nearby wishing pond. The sound of the small rocks plunked as they hit the stone wall before dropping into the water.

Oh, crap. She woke and sat up straight. The plunking noise came from outside, not in her head.

She felt her cheeks tighten in a wide smile. Biting the nails on one hand, she ripped her blankets off with the other. As she hustled to her window, she realized it was still pitch black out.

Grabbing the flashlight she always kept on her windowsill for just this occasion, she lifted the window and found Andy with the beam. “I thought you didn’t get home until tomorrow,” she whispered loudly.

“It is tomorrow.” He held up fishing poles and tackle box.

“It’s not tomorrow until the sun comes up.” She smiled wildly as she pulled on her jeans. This reaction she had to him had to stop eventually, she convinced herself. It was not healthy.

Posted by Chris Redding at 3:39 AM

Thank you for having back, Chris. You've done a great job with your blog.
-R.T. Wolfe