A bell rang, but Detective Angela Sky wasn’t getting her wings.

Not that she wasn’t due, she just hadn’t made the commitment yet. She’d get around to it, right now she had a murder to investigate.

She fished her Smartphone out of her pocket to see who had sent her a text message. That’s what had been ringing, well, dinging because she’d left it on the default sound for incoming messages. Dang technology. Harder to solve than most homicides.

Gabriel again. Sighing, she put the device back in her pocket. He’d have to wait. She pulled her shirt from her sticky back. Dang New Jersey humidity. The dog days of August in New Jersey was not her idea of a good time. She didn’t want murders of angels to take place at all, but she’d enjoy a cooler climate. Even the sun going down hadn’t taken the heat out of the air.

The body in question had already been removed, but had there been a chalk outline it would have included wings. 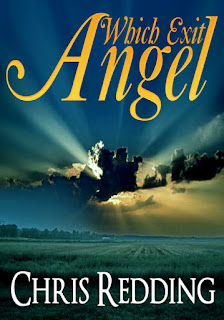 Due to be released June 2. Watch for an introductory price good for only two weeks.
Posted by Chris Redding at 3:34 AM