An Interview with Jo Graford

According to my parents, I’ve been telling whoppers since I was born.

Ever since I could hold my first crayon!

Researching the Lost Colonists of Roanoke Island has been a passion of mine for over a decade. Their story just happens to begin in May of 1587, so narrating the “rest of their story” naturally turned me into a historical romance author.

I plot, outline, ponder, and then tweak my outlines.

5. What drew you to the subject of Breaking Ties?

I first became fascinated with the fate of the Lost Colonists as an elementary school student. These brave pioneers generally receive a one-paragraph mention in school history books for their tragic attempt at colonizing – summarized with a one-sentence eulogy for the poor souls who were most likely slaughtered en masse by hostile natives. It never made sense to end such an amazing colonial venture on such a cruelly sad note, especially since no graves and no bodies were ever found. Nowadays, we’d call it a Missing Persons Report of gargantuan proportions and send out eleven amber alerts for the children.

6. Did you encounter any obstacles in researching it?

Of course. Their disappearance occurred over 400 years ago. The crime scene has not only been severely compromised, it’s about to erode and wash away entirely. I relied heavily on extensive reading of ship manifests, sailing journals, church registries, and other archives. Modern laser imagery is also proving very useful in providing new clues to one of the world’s most intriguing unsolved mysteries.

7. What was the name of the first novel you wrote? Did you try to publish it?

I don’t remember the title. I hand-wrote it as a teenager in pencil in a spiral bound notebook. The main characters were twin girls named Jeannette and Josephine (written in the style of Nancy Drew and Trixie Belden) who discovered a castle buried beneath an avalanche and gumshoed their way through a not-too-well-developed mysterious plot. I was so disappointed at how little it sounded like a real Nancy Drew novel that I burnt it in a backyard bonfire. What a tragedy! I truly wish I had kept it.

I no longer wait for the perfect inspiration or the perfect moment to write. I maintain a disciplined, daily writing schedule now. I’ve learned the inspiration will come when I park my rear in the chair and start typing.

9. How many rejections have you received?

Five or six. Most were email form letters. One or two places never responded at all, making me realize there was a whole new mountain to climb – I needed to tackle and learn how to carry myself in the new and foreign world of publication. Then my husband had a brilliant idea. He suggested I nagivate around the slush pile and attend a writing conference to meet live agents and publishers. Every agent and publisher I pitched my book to at the RT Booklovers Convention in 2013 asked to see the manuscript. A few weeks later, I signed a contract with Astraea Press.

10. What was the best writing advice someone gave you?

Write, write, and then write some more. The only way to get better is to write often and write a lot. Write even when you don’t feel like it.


Jo Grafford is from St. Louis, Missouri. An award-winning author at Astraea Press, Jo writes historical romance and YA fantasy. She published her first poem in junior high, edited her high school newspaper while typesetting for a local news journal, and has been writing ever since. She holds an M.B.A. and has served as a banker, a college finance instructor, and a high school business teacher. 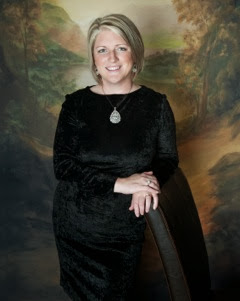 She is a PRO member of Romance Writers of America and From the Heart Romance Writers RWA Chapter. The mother of three children and the wife of a soldier, she serves as a literacy volunteer for elementary school students. Book Blurb


Rose Payne's world is shattered after a secret betrothal to the duke’s son gets her fired. Desperate for work, she signs up for a risky overseas venture and sails for the New World and a fresh start, vowing to never again fall for a wealthy gentleman.

Returning from a diplomatic tour in London, Chief Manteo is bewitched by the fiery-haired ship’s clerk. He contrives a daring plan to win her heart – one that forces her, honor bound, to serve as a slave to his tribe – a plan he prays will protect her from a chilling conspiracy involving murder, blood money, and a betrayal of their fledgling colony so terrifying it can only be revealed in Breaking Ties.

Posted by Chris Redding at 2:26 AM