After almost losing her Uncle Phen during the investigation of her mother’s murder, Felicia “Lucky” Fascino cut all ties and ran away, hoping her family would move on and forget the promises they made. Putting the past behind her has never been easy, but Lucky knows the job is slowly destroying her already fractured psyche. Staying away, especially now that her family is in danger, is the only way to keep everyone safe. 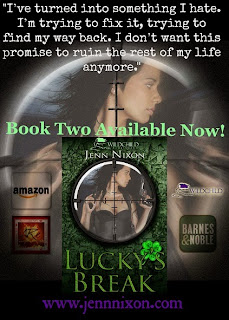 Kenji Zinn, determined to locate his ex-lover, tracks Lucky to a small island with her family’s help, and finds her in a miserable and self-destructive condition. His connection to her is strained after months apart but his feelings haven’t change, and he attempts to persuade her to come home, to protect her family and keep her promise. Despite her obvious mental fatigue, only Phen is able to convince her that the way to get closure is finding an elusive man named Quimby and take him out permanently.

Once home, Lucky breaks it off with Kenji, and agrees to go back to work if Phen promises to let her go when it’s done. While her family continues to track their target, Lucky returns to work for the network—struggling through each job, aware that pushing her family away won’t bring anyone the peace they deserve. As she begins to repair her shattered relationships, her true feelings for Kenji are tested when she almost loses him completely. Before it’s too late, Lucky realizes he’s her best ally to help her finish what she started and find Quimby before he strikes again.


Lucky and Kenji regroup after taking out an obstacle…

“That’s about as bad as it gets. Most of my marks are from a distance,” Lucky said with a shrug of her shoulders. “Up close and I tend to get….”

“Brutal, Kenji. I wanted him to hurt. I had to walk away, afraid I was going to pummel him just for the hell of it.” Her body shuddered under his hands.

“You were not brutal. You did what you needed to do.”

“I didn’t need to kill him. I wanted to.” She stepped back out of his grasp and walked to the bed. “I’m not some sadistic fuck who gets off on hurting people, but sometimes…and with you there this time….” When she sat down, she pulled her legs to her chest. “Everything that happened yesterday, being with you in the field and letting you see me that way….”

“The last few days have been taxing,” he said, sitting beside her. She reached the edge of every thought but held back, afraid to speak her mind. He kept his distance despite the desire to hold her.

“I’m still trying to wade through it all.” She put her head on her knees. “What were you thinking, after I killed him?”

“I thought you extracted all you could from him and finished the job.”

She turned her head to face him, seemingly agitated. “Then what were you feeling?”

“Satisfied it was over and impressed with your methods.”

Felicia huffed, got up from the bed, and started to walk away. He grabbed her wrist. “Let go.”

He held tighter and stood. “What do you want to know, Felicia? Stop being vague.” “How did you feel toward me?” Her voice was heated, sharp. “You were watching me like a hawk.”

“Mostly, I admired your abilities and thought of little else. There were moments I felt intimidated, other times aroused. Watching you overpower and manipulate that man was invigorating.”

“Why were you intimidated?”

“The way you handled the situation astounds me. I was not needed, yet you allowed me to help.”

She broke from his grip and walked to the opposite side of the room. He stood, silently waiting to see what she’d do. Rubbing the back of her neck, she turned around with wide eyes.

“After all that, you still want me.”

“I have never wanted you more.”