BLOODSUCKERS: A VAMPIRE RUNS FOR PRESIDENT is not a traditional vampire novel but more a political conspiracy thriller with humor. Oh sure, people turn into bats and drink blood ...

There’s a lot more information on my web page, along with links to other reviews and the first few chapters (so you can get hooked). You can get the ebook, nook, or kindle for as little as $6 or so, and the paperback for $15. 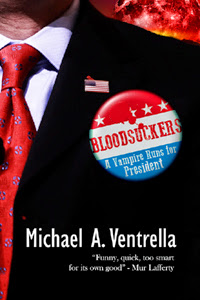 
“A lot of Christians aren’t going to vote for him because they think he’s a vampire,” said Collin.

Steve shrugged. “They already believe in magic and devils, so to them, vampires are a real possibility.”

“You don’t think vampires can exist?

Steve paused, embarrassed at his comment since he did not know his host’s views. He hoped he had not touched a sore spot. “Um, no, I don’t believe in vampires. I mean, look at him—you can see him in a mirror, he’s been doused with holy water by one of the Batties, and recently some people handed him crosses and he accepted them without a problem. He’s no undead.”

“But what about all that stuff about the bat in the video?”

“You mean the clip showing Brunswick’s balcony right after he jumped? Yeah, that’s all over the web. It might show a bat, but it might be a bird, too.”

“Some birds fly at night. And even if it was a bat, it could have just flown by right then. It’s not a good video, and doesn’t clearly show the creature coming from his window.”

“If I have to choose between a coincidence and something that defies the laws of nature, I’ll choose the coincidence.”

They sat in silence for a few minutes while Mark launched into his traditional “many different cultures and ideas forming America’s greatness” speech. The diverse crowd loved it.

“I’m going to get another beer,” Collin said, rising. “Want one?”

Soft thuds, clinks and clanks sounded behind him, but Steve’s attention centered wholly on Mark, who had become very serious, and the crowd very silent. 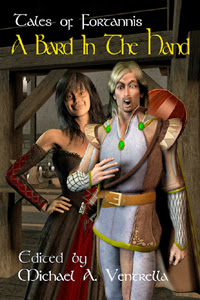 “This is a dangerous quest we are on,” Mark said in a hushed voice. “Many powerful people do not want us to succeed. They don’t want change. They know that if I’m elected they won’t be able to take advantage of the American citizen anymore. They know that I’ll shut down their tax shelters in the Cayman Islands and cut off their tax breaks when they ship our jobs overseas. They know that they will not have someone in the White House they can buy. And they will do everything they can to—”

The shots echoed across the stadium. Mark’s eyes grew large on the giant screens and then he fell backwards, clutching his chest.

Screams filled the air. Steve jumped up, unable to hear over the ringing in his ears.

Below him, politicians dove off the tiered platform and scrambled for cover. Mayor Ross clamped her hand over her leg, blood spurting through the gaps between her fingers. Another victim lay still in a pool of blood. Secret Service agents stormed the stage with weapons drawn. Two knelt at Mark’s side; the others turned in all directions. People in the audience tripped and fell over each other in a mad dash to the closest exits.

Steve noticed all this in the brief, stunned moments before he turned to Collin, who cursed, dropped the high-powered rifle, then turned to Steve and winked.

In a matter of seconds, Collin’s transformation into a bat was complete. His clothes fell to the floor and the bat disappeared into the night.

Someone threw open the door. 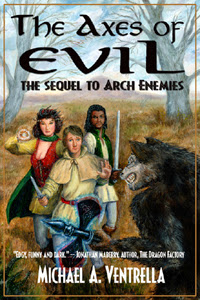 
Michael A. Ventrella’s other novels are ARCH ENEMIES and THE AXES OF EVIL. He edits the TALES OF FORTANNIS anthologies, and his stories have appeared in the collections HEROES IN HELL, TWISTED TAILS, and RUM AND RUNESTONES (among other places).