Love and faith are tested as Jason and Ariel are caught in a battle to expose smugglers selling weapons to terrorists.

It is said opposites attract. There can’t be two people more opposite than Ariel and Jason. Ariel is a traditional Quaker with an absolute aversion to war. Jason is the lead council for America's largest weapons manufacturer.

Their budding romance is thrown into turmoil when Jason uncovers evidence linking his employer to international arms deals that could devastate America. His determination to stop the treason puts Ariel in the middle of dangerous territory.

The kidnappings, killings and harrowing escapes from those trying to retrieve the evidence force Jason and Ariel to delve deeply into their often opposing long-held convictions, and question if they are truly meant to be together. 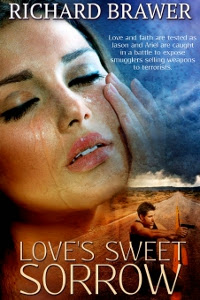 
The following is an excerpt where Ariel has developed strong feelings―maybe not quite love yet―for Jason and starts to change to please him.

Set up: It is Ariel’s birthday. Jason had agonized for hours over what to get her. Now he wondered if he had made a mistake getting her a gift that expressed so unabashedly what he wanted. He was taking her to dinner and a Broadway show to celebrate her birthday. Having second thoughts about the gift and not wanting to cause tension in their evening, he asked her not to open it until they got back to her apartment.

She reached for the end of the pink ribbon.

He took her hand. “Open it when we get back.”

“Because it’s to cap off the evening, not start it.”

(The celebration over, they had returned to her apartment.)

“Can I open my present now?”

He sat forward, crossing his fingers behind his back. “Go ahead.”

She pulled the pink ribbon. The bow dissolved. She lifted the top. The tissue paper rustled as she unfolded it. Cautiously she touched the lace trim on the shiny, jet-black garment and quickly withdrew her hand as if her fingers had been burned by a red hot branding iron.

A few minutes later she escorted him to the elevator.

Ariel took her present into her bedroom and placed the box on the heirloom bedspread. Ever so carefully she removed the black silk camisole, laid it on the bed and smoothed it out. She placed the tap pants below it. Slowly she undressed, dropping her blouse and skirt on the carpet. Reaching behind her back, she unhooked her bra then stepped out of her panties.

Slipping on the tap pants, she trembled as the sensuous silk stroked her long legs. Holding the camisole by the thin straps, she extended her arms over her head and released it. It floated over her torso sending a shiver through her.

Turning toward the mirror, she stood tall, her arms dangling next to her thighs. Will wearing this blind me to the hungry, the homeless? Will it prevent me from working toward a more peaceful world? I don’t think I will change my convictions because I put this on, or wear makeup, or like movies, art, TV, dancing and…

Her fingers fluttered against her thighs. She closed her eyes and envisioned Jason caressing the fabric against her hips, her waist, stomach, breasts.

Richard Brawer writes mystery, suspense and historical fiction novels. When not writing, he spends his time sailing and exploring local history. He has two married daughters and lives in New Jersey with his wife.

Love’s Sweet Sorrow will be available in mid September in both trade paperback and e-book wherever books are sold.

Read more about Love’s Sweet Sorrow and all Richard’s books at his website: www.silklegacy.com/

Book Giveaway: I will gift an e-book of “Love’s Sweet Sorrow” from Amazon to the first 10 responders to this blog. The only thing I ask is you read it as soon as they get it and post a review on Amazon and if you belong, to Goodreads. I do not expect anyone to compromise their ethics because I gifted you the book. Please write what you think. You can contact me at rich1braw@aol.com. Please put― giveaway lss Chris’blog― in the subject line so I do not delete your message as spam.