Crashing Into Love is a box set of 7 stories written by 6 spectacular authors and myself. Each story is based on an airplane crash, fight for survival and romance. The idea was the brain child of D'Ann Lindun and Brenda Dyer.


Seven planes lift off…seven planes crash…seven stories of struggle, passion and love in the barren Canadian Wilderness, the coast of England, or the steamy heat of a tropical island. Romance hangs in the balance between survival and death.


Brace for Impact by Daryl Devoré. What could be simpler than a routine plane trip from Toronto, Canada to Caracas, Venezuela for rookie flight attendant, Lori, and sexy R.C.M.P. officer, Guy Lapierre? But Fate had other intentions.


Lori gagged on the bile rising in the back of her throat. She inhaled sharply to calm her stomach. If I'm going to die, it's not going to be with vomit all over my uniform.

A distant whimper caught her ear. She lifted her head and opened her eyes. The lady in 37D rocked back and forth in her seat. Lori fought the urge to run to her. Her flight attendant training told her to stay seated. The Captain had called, "Brace for impact." 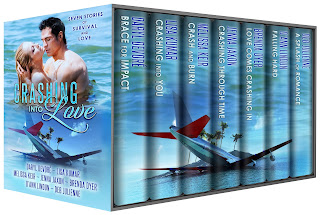 Hang on, 37D. Just a bit longer. I understand how you feel. Isolated way back here in no-man's land at the back of the plane. No one's hand to hold for comfort. Alone. Scared. Me too.

The gentleman in seat 36C stood then pulled open the overhead bin.

Lori sat up taller. "Sir! The Captain said, brace for impact. Get back in your seat. Please."

He turned his head, glancing at her. Lori blinked. She'd noticed him as she did her rounds of economy class. Sexy tousled hair. An unshaven chin. Gorgeous smile. Focus on your job. "Sir. Please. Sit. Down."

He grabbed a bag out of the bin, slammed it shut and returned to his seat.

Her heart raced as she shouted out the words she'd practiced in flight attendant school a hundred times and prayed she'd never have to use. "Head down. Brace. Brace." She hoped the sound of her voice could offer a moment's relief to the terrified passengers in economy. They were her passengers. If she could hold each of their hands, she would. "Head down. Brace. Brac—"

The plane dropped and shuddered.


Daryl Devore lives in an in old farmhouse in Ontario, with her husband, a large salt water aquarium, a tamed feral cat and some house ghosts. Daryl loves to take long walks up her quiet country road, or snow shoe across the back acres and in the summer, kayak along the St. Lawrence River. She has touched a moon rock, a mammoth and a meteorite. She's been deep in the ocean in a submarine, flew high over Niagara Falls in a helicopter and used the ladies room in a royal palace. Life's an adventure and Daryl's having fun living it.