A couple of years ago I joined a flash fiction group. What's that?? Once a week the moderator posted a list of words and photos to be used as prompts to write a 500 – 1,000 word episode of a story.

Way back – and I mean waaay back – in 1901, Sir Arthur Conan Doyle published his book, The Hound of the Baskervilles, as a weekly serial. My flash fiction stories are similarly presented.

What are some word prompts – fantasy, extinct, brilliance, magic, apology, a body of water, night sky, cloud, moon, the twelfth of never, twinkle, sacrifice, and bells.

What are some photo prompts – well to start - a red tulip – similar to the one on the cover, a man in a bowler hat wearing a long coat holding a walking stick, a kitten, Santa, snow scene, clock tower, fireworks, moon, cups of coffee, blue DNA, and a waterfall.

Yes, they are very eclectic prompts and it was challenging fitting them into the story. The Santa Claus prompt came during December, but my story is set in the summer. 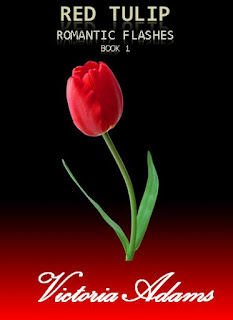 I decided to publish my flash fictions under the serial title of Romantic Flashes and Red Tulip is the first story. It's a sweet contemporary romance with a bit of mystery twisted into it.


Darcy O'Calahann, a junior gardener from a small mid-western town, is trying to make her way in the big city.

Shamus McRae is a wealthy bachelor with a mysterious family past.

Are Darcy's eyes playing tricks on her? Is she losing her mind? Or is there really a Red Tulip tying her and Shamus together?


"When was the last time you were offered the gift of a red tulip?"

I turned to see who spoke while I wondered if he was addressing me. A man sat on a park bench, dressed in a dark suit, with a bowler hat, holding a cane and his head bowed. I shifted to continue along the path when his face lifted and I found myself gaping at two glowing green eyes.

"When was the last time you were offered the gift of a red tulip?"

I blinked, trying to look away from those mesmerising orbs. "Uh, never. I mean, no one has ever offered me a tulip."

"Okay, no one has ever offered me a red tulip." Uneasiness slithered through me.


Victoria Adams lives in Ontario, Canada with her husband and pets. She likes to garden, cook and belly dance. She's been writing since she was little. Being an only child, long car rides were filled with making up stories in her head about the people she saw out the car window.

Thanks for letting me drop by your blog today.