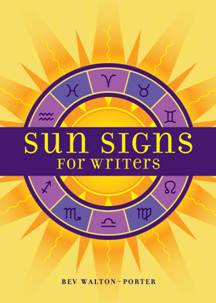 Welcome author and writing coach Bev Walton-Porter. She will be under the microscope today to talk about her new release Sun Signs for Writers.

1. When did you know you wanted to be a writer? From an early age, my dad used to read to me every single night. I couldn’t get enough of the storytelling and would beg for more. I had a small library of books, mostly fairy tales, Aesop’s Fables and Babar’s Adventure books. That enchantment with books led me to a lifelong fascination with writing and instilled me with a desire to weave tales myself. That desire to write was later seeded by a 6th grade teacher.

2. How long have you been writing? Oh boy. Hmmm…the first time I remember writing a complete short story, I was in 6th grade. My teacher at that time told me I wrote well and encouraged me, and that’s what planted the seed. My first real story was about a Mako shark, mainly because I used to be obsessed with sharks. Well, I s 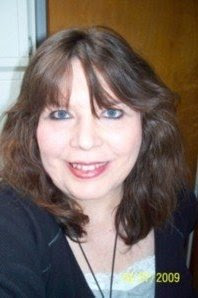 3. How did you pick the genre you write in? I actually write in a variety of genres, including nonfiction, romance and dark fiction. If you limit yourself as a writer, then I think it can end up hurting you in the long run. I selected the genres I most enjoyed and chose to pursue them.

4. Do you plot or do you write by the seat of your pants? When I write, I have a loose outline of where I’m going and how I’m going to get there, but I’m not an obsessive outliner by any means! In general, when I write fiction, I let the characters dictate how the details of the plot will unfold. I know the basics of how I want the plot to go, but the characters determine the intricate specifics of how the plot gets laid out and presented to readers. When I write nonfiction (which requires just as much planning as fiction), I do the same thing: I have a loose skeleton of the idea, but the meat is added on chapter by chapter on an almost-intuitive basis fueled by the day’s creative surges.

5. What drew you to the subject of Sun Signs for Writers? Ever since I was a little girl I’ve been fascinated by astrology and other forms of divination. I’m also drawn to creativity and writing (obviously), so one day I wondered why nobody had combined the elements of astrology and writing, especially as it pertained to the personality/writing styles of individual writers and developing characters as well. I did some research and found nobody had written a book about that, so the seed was planted and, two years later, my first book was published.

6. How many rejections have you received? People are going to hate me, but it’s probably been less than the average writer. I’ve been lucky. I have received some rejections, but if I had to put a number on it, I’d say 90 percent of what I submit is usually accepted and published. I’m not bragging , though. I’m saying I’ve been lucky, and the rejection fairy has probably been waiting to slam me at a later time, so let’s say I’m grateful for the good fortune I’ve had, and I can only hope it will continue. Either way, I’ll keep writing!

7. Why did you pick the publisher that ultimately published your book? I’d been familiar with Writer’s Digest Magazine and Writer’s Digest Books for decades. In fact, WD played in big role in helping me get published and become a professional writer. So naturally, they’re the first ones I thought of when it came to a potential publisher.

8. Tell me one thing about yourself that very few people know? I write fiction under the pen name, Star Ferris. But Star Ferris is more than a pen name for me. I was adopted and while my legal name is Bev, my birth name was Star. So when I needed a pen name, I decided to use what would’ve been my legal name had I not been adopted.

9. What’s your writing schedule? I’ve tried writing at all times of the day, but I’ve found I’m incredibly nocturnal and that’s when I’m able to do my best work. So during the day I edit, critique, teach courses online, research or market using social networking, and at night I indulge my Muse. Night time is the BEST time for writing, as far as I’m concerned!

10. What do you do when you are not writing? I’m the Founder and co-Team Lead for Colorado Springs Paranormal Association (C.S.P.A.), so I spend my free time studying the paranormal.

Author Bio:Bev Walton-Porter is a professional author, editor and writing coach. Published works include Sun Signs for Writers, Mending Fences, Hidden Fire and The Complete Writer: A Guide To Tapping Your Full Potential. Bev has also published a poetry chapbook entitled Shadows of the Soul. She has been a professional writer since May 1997.Bev's nonfiction is represented by the Meredith Bernstein Literary Agency in NYC. Her fiction is represented by MPL Creative Services in Springfield, MO.

Book Blurb:Sun Signs for Writers is a one-of-a-kind guide that will help you discover your unique writing personality by combining the insights of astrology with practical how-to writing instruction. By exploring the proclivities of your particular sun sign, you'll better understand your creative style and more effectively find your path to success.
Posted by Chris Redding at 11:55 PM

Hey Chris! Thanks so much for featuring me on AuthorDay! ;-) I am really appreciative. I did want to mention that Sun Signs for Writers isn't my newest release, that Hidden Fire (written under my pen name Star Ferris) is, but as long as everyone knows about both, I'm happy ;-) Happy holidays!