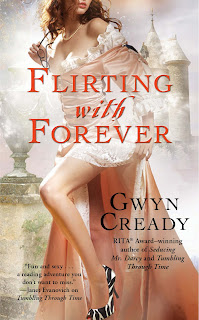 Today Gwyn Cready she shares an excerpt of her latest Flirting with Forever.
Hi, I'm Gwyn Cready. I write sexy, romantic time travel novels. Publishers Weekly called my debut, Tumbling Through Time, "a joy." Seducing Mr. Darcy, my second novel, won the 2009 RITA Award for Best Paranormal Romance. My latest, Flirting with Forever, tells the story a long-dead painter who comes back to Earth to settle the hash of the author of The Girl with a Coral Earring, whose series of sexy, tell-all biographies is driving the dead art world nuts. It got 4 ½ stars from Romantic Times and a starred review in Publishers Weekly. It's my most romantic book yet.


Peter pressed an exquisitely-cobbled shoe against the side of the desk drawer and rubbed his aching temples. Despite all the appointments of success--the fine clothes, the freedom to paint when and what he choose, the admiration of a highly-appreciative king, row upon row of apprentices doing his command, a full waiting room and an even fuller account with his bankers--he felt nothing but despair. Even the fat emerald ring, once such a prize, was a torture for it reminded him of Ursula and how he had treated her. It had been heartbreaking to live through part of his life the first time. And now to be asked to live through it again was a sorrow so exquisite, he could barely speak.

"Peter," Mertons said, "I hope you know how much the Guild appreciates this."

Peter grunted. The Executive Guild managed the souls passing through the Afterlife, specifically those within the artists section, and Mertons was the time jump accountant who had been assigned to this case. Time jump accountant was his official title, but Peter knew the unofficial reason the Guild had sent him was to ensure the moody, unreliable painter they'd enlisted managed the mission properly and stayed within the prescribed rules, so perhaps 'nursemaid' might be more appropriate.

"It wasn't as if I had a choice." Peter slitted his eyes and let the dying November sun warm his face. The evenings were the hardest. During the day he could lose himself in painting, but at night… At night, all he had was wine and his memories. How could he have once held success in such esteem?

Mertons shrugged. "You will get what you want, Peter--a new life as an artist." The Guild had the power to choose the new life into which a member of its constituency, in this case, painters, would arrive, bundled in his or her new mother's arms, with only an obscure hint of the sadness or joy of their former life to tint their memories.

And while Peter desperately wanted a new life as an artist--he couldn't imagine himself, or at least his soul, spending the next sixty years as a barber or dairyman--what he really wanted was a chance to redeem himself, which he knew he would never find. He had finally agreed to slip back into the pinched, desiccated skin he had sloughed off at his death two years earlier for one reason only--to try to return Ursula's good name to her, an intention he had purposefully not shared with Mertons, who had been assigned by the Guild to accompany him and who monitored the attacks on his precious time travel constraints with the ferocity of mother lion.

"Tell me again what we know." Peter had heard the story several times since their arrival a week ago. Nonetheless Mertons liked to tell it, and it would give Peter time to prepare for acting out his plan. He glanced at the clock and then at the small storage room off the office. Just before five. Good.

Mertons sighed and looked down at his clipboard. "To be honest, we know very little. The writer's name is Campbell Stratford--a Scot," he added as if that added a significant detail to the understanding of the event. "The book will be an embarrassment to the Guild--"
Posted by Chris Redding at 11:02 PM