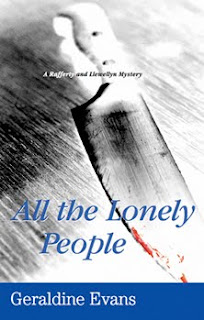 Put potatoes on to boil.
Put minced beef and sliced onion in a frying pan and brown. Pour 1 pint boiling water over stock cube and good pinch of mixed herbs. Pour over meat and onion and place in oven dish.
Once cooked, mash potatoes, and spoon on top of meat etc.
Grate Cheese and place on top of meat.
Cook in oven on medium heat for 45 minutes.
Serve with green beans and tinned tomatoes

BLURB
All the Lonely People

When Detective Inspector Joseph Rafferty visits his local watering hole for a quick drink, he's looking to forget his troubles, not add to them. His fiancee, Abra, is still refusing to talk to him, and he's fast losing hope of a reconciliation. But then, after a very public argument, a man is found dead - stabbed to death in the pub's car park - and a gloomy Rafferty takes on the investigation and what first appears to be an open and shut case quickly becomes a lot more complex. The witnesses all plead alcohol-induced memory loss, and Rafferty's habitually cautious sidekick Dafyd Llewellyn isn't helping either - casting doubt on all Rafferty's conclusions.

As Rafferty wrestles with the case, he has also to wrestle with Abra's intransigence and determination to avoid their problems. Soon he is in despair on both counts...

BIO
Geraldine Evans is the author of sixteen novels (fourteen crime). She started out writing romances for the Harlequin/Mills & Boon market. She wrote a book a year for six years, only the last of which was published, but not by Mills & Boon (Robert Hale, 1991).

She then switched to crime novels and her first effort in the genre, Dead Before Morning, was taken from Macmillan's slush pile and published, both in the UK and the US in hardback and paperback. That was in 1993. In total, Macmillan published four of her novels. and apart from a second lengthy blip when no one wanted her books, she has been published ever since and is now with Severn House.

She lives in Norfolk in England and is married to George.

Latest Novel: All the Lonely People A Rafferty & Llewellyn crime novel
'The ending is as satisfactory as it is uplifting; the case is cleverly solved. A very good read and highly recommended.'
Mystery Women
Posted by Chris Redding at 11:47 PM