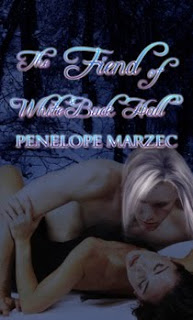 Tiger Woods didn't win this weekend, but author Penelope Marzec is an author I've known for a number of years. She's very enthusiastic when you meet her. Here is an excerpt from her latest

Blurb for The Fiend of White Buck Hall:

They say Thomas Hillyer, a wizard, is in league with the Devil and that the white buck roaming his estate hypnotizes people and steals their souls. Molly is a fugitive, wanted for a crime she did not commit. Seeing a want ad for a secretary in a sleepy town, she sets off for White Buck Hall but ignores the warning about the albino stag who lurks in the woods. When she meets him on the forest path, her life is forever changed.


Excerpt from The Fiend of White Buck Hall, by Penelope Marzec


He walked up to the desk. The letters were not there. However, the blue ribbon he
had untied sat on the blotter exactly where he had left it. Hesitantly, he reached out and
lifted it up. It smelled of honeysuckle.
Dammit.
Heat coursed up his arm as he clenched the ribbon in his hand. He closed his eyes
and pictured Molly removing that ribbon from her luscious hair while the sweet scent of
honeysuckle wrapped him in a cloud of longing.
He was deranged!
Forcing himself to open his eyes, he jammed the ribbon into his pocket but he was
sure he could feel warmth seeping from his pocket to his skin. It was as if she was there,
touching him with her heated skin. Blood pounded in his brain, surging towards his loins.
He slammed his fist on the desk. Fighting to maintain his equilibrium, he swirled
the wand in the air and pointed it at the desk. A whirlwind appeared and grew into a gray
twister that swept through the drawers, the pigeonholes, and under the desk—and found
nothing.
Frustrated, he stamped back into the dining room. The platters of food were now
cold. Molly had eaten everything on her plate. She did not look up at him, but sat idly
twirling the stem of her empty wineglass.
He set the wand down on the stack of papers, grabbed a platter and began heaping
food on his plate.
“Did you … burn them?” Her voice was high and breathy.
He saw the ostrich feathers in her hair trembling. He turned his gaze back to his
dinner. He must ignore her! He had to hold himself together—he could not allow himself
to feel her pain. He had more than enough of that already. She had completely destroyed
his concentration. He put a forkful of cold chipped beef into his mouth.
“If you threw them into the fire, it was for the best. I should have burned them
myself.”
He closed his eyes and saw the image of that one tear-stained letter. Had she held
that letter in her hands while her tears washed away the ink? He wondered what the salty
flavor of her tears tasted like. He knew it had to be better than the chipped beef in his
mouth.
He put his fork down and rubbed his eyes. He had to send her away. Soon.
What had Rafe said? If you want her to recover quickly, you must not trouble her
mind.
He stuck his hand into his pocket and felt his fingers ignite with heat. He pulled
out the blue ribbon and threw it on the table. It was the wrong thing to do. He saw the
color fade from her face, making her eyes appear huge—like the eyes of a doe.
The pain of his wound returned full force, searing him as if he had been cut anew
with a hot knife.

Penelope Marzec started reading romances at a young age even though her mother told her they would ruin her mind, which they did. She became hopelessly hooked on happy endings. She is a member of the New Jersey Romance Writers, the Liberty States Writers Fiction Writers and EPIC. Two of her inspirationals won the EPPIE award and The Keeper’s Promise was a finalist as well. Her paranormal, Irons In The Fire, was a nominee for a Romantic Times Reviewers’ Choice Award.