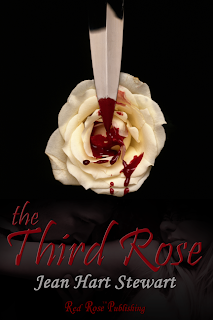 Welcome to Jean Hart Stewart on her Virtual Tour for her latest book.
She found him in the library, as she’d expected. His tousled hair was in his hands as he leaned dejectedly on his desk. She fought back the urge to nestle his beautiful head against her breasts and comfort him. Men were not supposed to be beautiful, but Josh was. None of the paintings or statues she’d ever seen compared to Josh. He’d taken off his coat, and his shirt seemed very white against the black hair showing on his chest.


She wanted to feel none of these emotions. Right now life loomed as much too confusing. Why would she long to touch and run her fingers through those dark hairs she could only glimpse? Why did she long to comfort the man who she’d set out to physically destroy? Comfort him by taking him in her arms? One look at him and she forgot everything but the heat suffusing her. She didn’t want to be romantically attracted to any man.

He looked up, his eyes bleak. “I feel like the veriest dolt. I’ve tried everything I can think of, and yet I come up with nothing. I fear this message is beyond me. Yet it haunts me. I know deep in my bones it’s vitally important I break the code, and soon.”

It took effort for her not to go to him and comfort him. But that would not help him, nor indeed, her. She thought if she once laid her hands on him, she’d forget about the code and the message calling to be deciphered. She didn’t understand much of anything lately. Certainly not her own ridiculous self.

“How did you manage to break the last code?” she asked. Perhaps if they talked about it, one of them would get an idea.

“As I told you, I used the word ‘enemy’, but I didn’t get the word out of the air. Each message so far has contained a clue hinting of the key to the next message. There were no clues in the last message except the words you know, ‘the third rose in the library’. You found the rose in the library. And I’ve worked every combination of those words I can dream up. Nothing. Simply nothing.”

I feel I’m very much a Californian although I was born in Ohio. California has been home for a good many years. Life changed drastically when I was six and my father died, incredibly from an errant golf ball. A dishonest insurance agent left us with little income and forced my sheltered mother to seek work, and she became a teacher. Her hours required me to be alone in the house most of the afternoon, and since I was forbidden to leave till my mother got home, I became an avid reader. The local library supplied most of the books and I fell in love with both Jane Austen and King Arthur.
Reading is still one of my favorite activities, although I often have to push it aside to make room for my compelling love of writing. My journalism degree wasn’t much use to me until recently. Marriage and raising two children pleasantly got in the way. After twenty years of being a real estate broker and with the kids raised I could finally devote my time to writing, my first love.

Few things in my life have been so satisfying, especially when all my books have a happy ending. Wonderful to make that happen. It only gets more interesting when a secondary character demands his very own book. Sometimes a new character is so noisy I just have to give in. Shouting inside my head gets my attention, believe me, and those guys usually turn out to be fun to write about.
Posted by Chris Redding at 11:33 PM