Nicola Furlong survives the travails of writing by playing hockey, gardening and eating chocolate fudge. She is a shameless self-promoter, creates book trailers and podcast for writers called The Novel Experience and is the co-creator of a new multimedia storytelling platform called a Quillr. 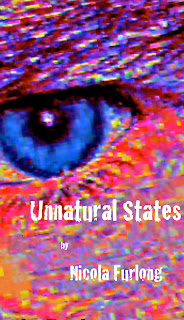 Her first Quillr, a controversial suspense thriller, may be experienced as an e-book or online at http://www.unnaturalstates.com. She is the author of two stand-alone mysteries and six inspirational cozies from the Church Choir Mystery series. She has also written two brief e-book primers (Youdunit Whodunit! How to Write Mysteries and Self-Publish Your E-Book in Minutes!), as well as a gardening guide for the West Coast. Nicola lives in a small town on southern Vancouver Island, BC.

What astounding secret, resurrected from a controversial relic, is being shrouded by the stigmatic, pop-evangelist John the Apostle? Three strangers are desperate to know. Their combined inquiries trigger revelation, ruin and murder in this supernatural page-turner. Prepare to be intrigued, challenged and shaken up. (Also available as a free online multimedia experience at http://www.unnaturalstates.com/)

"... an age-old battle between good and evil...Not only does this story have intrigue and mystery as well as paranormal and spiritual implications, but it also deals with many scientific and ethical questions." MyShelf.com 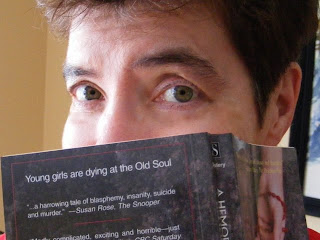 His ears pounded with the rumble of horses’ hooves. De la Jacob gagged in the smoky air, his peasant mind hammered by a terrifying voice. He squinted into the gloom.

Outside the ancient chapel swarmed the Knights of the Fourth Crusade. Plundering and destroying centuries of wealth. The massive doors of Our Lady of Blachernes thudded. Shattered hinges rasped. Smoke snaked inside.

The tongue screamed again. Ordering him forward. Terrified, he lunged at the blinding white shrine—

“John? Hey, John!” Brendan shouted into a microphone. From his position inside the control booth, he punched a couple of buttons on an instrument panel. “What’s the hold up? We’re recording.”

John Jacobs’ consciousness slammed into his body. He blinked, adapting to the sudden change. It hadn’t been a hallucination. He had been there. Inside the body of his ancestor, a serf in thirteenth-century Constantinople.

Slowly, the singer/songwriter nicknamed the Apostle absorbed his surroundings: the cluttered studio, his five band members and his quartet of backup singers. He knew he was safe in his Passion Ministry compound. And primed for the transformation. His knees buckled.

A steadying hand gripped his arm, then whipped off. “He friggin’ burned me!” The bass player blew across his finger tips. “Howzat possible?”

John spread his arms. Welcomed the bizarre and terrifying intrusion. Pain struck immediately in his head. Swirled. Ripped into his wrists and right side. His body convulsed in spasm. An image of his young son, bedridden and pale, seared across his mind. Jimmy.

“Whoa…” whispered a backup singer inside the studio. “I smell roses…”

Lights exploded behind John’s eyeballs. He gagged as his flesh ruptured and thought of his son. The boy was safe. And one day, praise God, Jimmy would embrace his destiny but John flinched. For on that day and ever after, there would be skepticism, global scandal, death threats.

Back in the control booth, Brendan flicked a puzzled glance at the man seated beside him. “What’s he doing?” Brendan asked. “Meditating?”

The musicians and technicians had been cooped up in the Ministry’s main recording studio for days, finishing John’s album, Unnatural State. Nine of the ten tracks had been mixed and in the can, thanks to the brilliant young producer.

Brendan shoved him off. “Whaddaya mean, wait?! You’re the bitch banker who’s hanging the Easter deadline over my head, goin’ on and on about costs. What is he—oh, that does it!” he snapped. “Stuff this waiting crap! We’re layin’ the final voice tracks here. I’m going in.”

He ripped off his headphones. Charged inside the soundproofed studio, with Phil on his heels. There was an eerie quiet as a sweet scent drenched the room. Both men froze.

Blood seeped from the Apostle’s wrists and side; he moaned then collapsed into the arms of the surrounding musicians. They carefully laid him on a sofa.

“JESUSmaryandjoseph!” a vocalist cried out, dropping to her knees.

Philip exhaled. “Never actually witnessed the beginning before, but right on time, baby. He’s showing the marks right on time.”

Another vocalist stared at the dime-sized hole on John’s wrist. Screamed and fainted.

Wow if that doesn't leave a reader wanting more, I don't know what does!

Thanks for the opportunity to be your Excerpt Tuesday Guest. Greatly appreciate it! BTW, I love the title of your latest, Corpse Whisperer. Cheers.