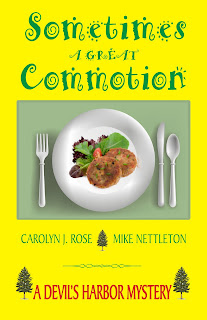 Carolyn J. Rose and Mike Nettleton share an excerpt of their latest Sometimes a Great Commotion.


“Thank you,” Elspeth Hunsaker said as Shelley Perkins set the plate in front of her and topped off her coffee. It was important to display good manners, even if Shelley was performing a paid-for service and not, in the strictest sense, doing a favor.


“You’re welcome.” Shelley totaled Elspeth’s lunch bill. Coffee and the crab cake special: $4.69. Elspeth had already done the math and planned to leave a thirty-one cent tip. Fifteen percent, she rationalized, was merely a guideline, not a law. Besides, the crab cake looked a little scorched.

Shelley set the check beside the salt and pepper shakers. “Can I do anything else for you?”

Elspeth couldn’t pass up that invitation. “You could stop consorting and cohabiting with the boy who sells that blasphemous ice cream.”

“I’m sorry to be so blunt,” Elspeth said, well aware that she felt not a scrap of remorse. The girl needed to know. . . “I have it on good authority that you two even shower together.” Good authority being a strong pair of binoculars and the gauzy curtain in Ichabod Ferris’s bathroom window.

“I most certainly did.” Elspeth sat up straighter, proud of having done her civic duty. “Before I cast that vote I asked myself ‘What would Jesus do about the water situation?’”

Shelley tugged at one crystal earring. “Walk on it?”

“No! Not waste it,” Elspeth snapped.

Elspeth felt blood throbbing in her temples, but before she could retort, Shelley sashayed off. . . She eyed the jumbo-sized crab cake that sprawled across her plate next to a mound of French fries, a scoop of coleslaw, a paper cup of tartar sauce, and a sprig of parsley. . . Her breath caught in her throat. Jaw dropping in disbelief, she stared at the grill marks on the crab cake’s golden breading, rotated the plate a quarter turn, leaned closer and stared some more. Yes, there was his hair, his nose, his chin. As she gazed upon it, the crab cake seemed to glow with an inner light and Elspeth was certain that, faint and far in the distance, she heard a celestial choir.

Who would have thought a sign from above would appear in the Devil’s Food Café?

Again she leaned close, cocking her head to better hear any utterance emanating from the scorch marks between chin and nose, the scorch marks that—if she squinted—looked almost like lips. She listened with every fiber of her being, holding her breath until she felt her eyes bug out. And then she was certain she heard a wisp of a whisper. “Go forth.”

“Oh, hell,” Shelley yelled from the kitchen. “I dropped the damn silverware tray.”

Suppressing a murderous urge, Elspeth calmed herself, cleared her mind, and listened once again. Alas, the crab cake spoke no more.
Posted by Chris Redding at 11:44 PM

Chris, thanks for letting us stop by your cyber home.

Elspeth Hunsaker, is, without doubt, one of my favorite characters in the Devil's Harbor Mysteries. Sure, she's out there. But she's earnest. Her belief in the absolute rightness of her convictions echoes what we see out there in America's political and religious landscape.

I want to know how you came up with the name Elspeth. That alone is enough to make me want the book.

And I wish I could remember. I guess it just felt right for the character.