Wendy Soliman was brought up on the Isle of Wight in southern England but now divides her time between Andorra and west Florida. She lives with her husband Andre and a rescued dog of indeterminate pedigree. When not writing she enjoys reading other people’s work, walking for miles with her dog, drinking good wine and generally making the most out of life. 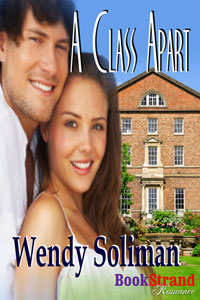 http://www.wendysoliman.com
http://www.wsoliman.com
Facebook: https://www.facebook.com/wendy.soliman.author?ref=ts
Blog: http://wendysoliman.blogspot.com/
A Class Apart
Lady Octavia Radleigh is devastated when Radleigh Manor, her ancestral home, falls victim to her grandfather’s crippling debts. Jake Bentley, boy made good from the East End of London plans to buy Radleigh to prove to the world that he’s made it but reckons without Octavia, who’s determined to turn it into an upmarket hotel to attract American tourists. Now all she has to do is persuade Jake to finance her crazy scheme…
A Class Apart by Wendy Soliman from SirenBookStrand or Amazon.com September 2011
How long have you been writing? 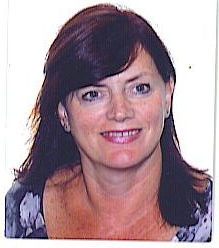 I wrote my first novel when I was fifteen, so I guess I’ve always been drawn to words. I certainly live in a fantasy world most of the time! I wrote a second book when I was in my twenties and, no, I’m not telling you how long ago that was. It was just a long time, okay! Anyway, I took it up seriously about eight years ago when the circumstances in my life changed and I had the time for it. Incidentally, my third published book was based around the plot for the one I wrote in my twenties. Moral of the story: never throw anything away.
Do you plot or write by the seat of your pants?
Both. When I’m writing historicals or even contemporary romance I tend to start with a premise – a what if – and let the characters run with it. It’s amazing what they get up to and where they take me. For my series of marine crime novels that I’m writing for Carina Press I do need to do an outline and a lot more research but I never stick to it. My tendency to let the characters sort out their own messes is too deeply entrenched, I guess.
Tell me one thing about yourself which few other people know.
Well, I’m told I come across as confident but, let me tell you, my self-esteem is just about zero. Getting published was one of the few achievements that made me feel good about myself. It continues to do so every time another book gets accepted.
Describe your book
My first five books were all Regencies. I guess coming from the Isle of Wight, with all those historical buildings littering the landscape, a sense of history seeped into me like osmosis. As I gained in confidence I decided to try something different and a ‘modern’ historical seemed like the logical step. England is still full of aristocrats but not all of them are as wealthy as they once were. What if a titled lady discovered that her ancestral home had to be sold and that a self-made upstart from the East End of London wanted to buy it to prove to the world that he’d made it? That’s the basis of A Class Apart.
What drew you to the subject of your novel, A Class Apart?
The class society in England fascinates me, especially the way the aristocracy it being forced by circumstances and society to adapt to the modern world. Even the Queen pays income tax nowadays – shock, horror! Unlike the Regency period that I first wrote about, modern Britain doesn’t turn its nose up at business men, especially successful ones, but it’s a concept  that my heroine Octavia in A Class Apart finds hard to accept. Game on!
Did you encounter any obstacles in researching it?
Not really. I learned a hard lesson when my first book was published. Part of it was set in Alexandria, Egypt two hundred years ago. I diligently researched the period to death and proudly put a lot of my findings into the novel, just to prove I knew what I was talking about. My editor put a red pen through the lot of it, telling me to cut most if not all. This is a novel, Wendy, not a history lesson. You’ll bore your readers. It was a bitter pill to swallow but I took the advice on board, mainly because I could see it was right, and now only do enough research for authenticity.
Where do you write?
We’re fortunate enough to divide our time between Andorra, a small principality high up in the Pyrenees mountains between France and Spain and west Florida. In Andorra, where I am at the moment, I have a tiny desk in my own room where I beaver away. In Florida we’re in the process of creating a study with fitted floor to ceiling bookshelves for my tomes. My dream come true!
What’s the name of the first novel you wrote? Did you try to publish it?
Can’t remember the names of the books I wrote when I was a kid, (which is probably a good thing!). The first one I wrote when I took it up seriously eight years back was Lady Hartley’s Inheritance – yes, the one that had the setting in Alexandria! – and it was published by Robert Hale in England, as were the next four.
If you could ask readers one question what would it be?
What attracts you to a particular book? Do you indeed judge it by its cover? Is your interest piqued through blogs, review sites, promotion of any sort? Do you always favour a particular genre or take pot luck?
What next in your writing career?
I’m now a split personality. I write historical and contemporary romance as Wendy Soliman and marine crime mysteries from Carina Press as W. Soliman. I have six titles coming out in the latter half of this year so check both my websites for more information.
Thanks for having me here. It’s been a blast.
Posted by Chris Redding at 12:01 AM

Reputation management is an
absolute necessity for automotive dealers in today’s
viral world.