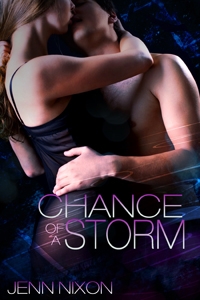 Blurb & Excerpt from Chance of a Storm, the sequel: Wild & Wicked


Mason Storm waited three agonizing months to hear from the wild Veronica Chance after she walked out of his life and back to her world. Instead her sister calls, sobbing, and begs him to come to California . He drops everything and takes the first plane across the country to find out what happened. After a chilly welcome from General Michael Chance, Mason learns Veronica was kidnapped along with her mother who is still being held hostage. Their initial meeting is short, but Veronica is determined to get her mother back safely and asks for Mason's help knowing he can get the job done. He's eager to get involved and carefully navigates his way into the investigation while trying to figure out exactly where in stands in Veronica's eyes.


Keeping her focus off of Mason Storm grew harder each moment she breathed the same air as him. He constantly watched her. Pondering eyes studying every word, facial expression, and body movement she made. Feeling his arms around her once again threatened to drive the last bit of sanity from her mind. Veronica wanted to get swept away by the man. Spiral into the madness of lust with someone who already revved up her engine like no other man had.

Veronica couldn’t afford madness now as much as it killed her.

Her father continued his retreat into the house, up to the second floor, closing in on his library. She wouldn’t let him get away that easily. “You can’t give them that file and you know it.”

“Then you condemn your mother to death.”

“They’re playing the game. You have to play it back,” she said, grabbing his arm to stop him from going further.

“Enough!” her father snapped, dagger eyes digging into her soul.

He grabbed her by the arms, lifting her to her tip toes, touching his nose to her. “I’ll decide what we will and will not do.”

“General!” Storm shouted from behind. “Back off.”

Her father’s eyes filled with fire, neck craning back. “You have no business here, Mr. Storm. I suggest you cut your losses and leave before I have my men remove you.”

“Try it,” he said, way too calmly as he moved to her father’s side. “Your daughter wants me here. I can understand why, you don’t listen to her; you cut her off all the time, talk down to her and Valerie. If you’d paid attention, you’d see she’s as scared as you are.”

He released her from the vice grip, straightened his shirt and stared down at her. Her anger threatened her wild tongue, but she stayed silent, shocked at Storm’s speech and keen observation. “I’m…sorry, Roni. I haven’t been thinking clearly since…”

“I know,” she responded but didn’t reach out to offer him any comfort this time.

“There’s nothing we can do tonight.” He frowned, running his hand through the silver strands on his head. “Let my men do their work…we’ll regroup in the morning.”

“Okay,” she replied with a nod. “If I remember anything else, I’ll let you know.”

“Very well,” he said, regarded Storm with a narrowing gaze then vanished inside his library.
She sighed, covered her face and shook her head. “Such a mess.”

“Yeah,” Storm replied. When she gazed up, his cheeks were still fiery with anger, hands clenched at his sides. “Are you okay?”

Jenn Nixon resides in  New Jersey . She is a member of Romance Writers of America and Liberty State Fiction Writers. Her love for thrillers and suspense often finds its way into her novels whether they are Science Fiction or Romance. When not writing, Jenn spends her free time reading, absorbing pop culture and current events, and social networking online. Current releases: Wild & Wicked and Chance of a Storm: Tease Publishing LLC.

Email ThisBlogThis!Share to TwitterShare to FacebookShare to Pinterest
Labels: Jenn Nixon, Storm of a Chance

Thanks for having me, Chris!

Wow, what an intense scene! Well written and had me on the edge of my seat!!

If you want to locate car shipping, auto transport, car moving, and auto shipping
companies throughout the US and Canada,
auto transportyou and your car have come to the right place

A dissertation is a combination of long pieces of writings on a certain topic.Dissertations can be written in various formats, but the most favorite are the APA and MLA formats.so if u want any dissertation writing service u can see all
details on Dissertation Writing ....

Their initial meeting is short, but Veronica is determined to get her mother back safely and asks for Mason's help knowing he can get the job done. He's eager to get involved and carefully navigates his way into the investigation while trying to figure out exactly where in stands in Veronica's eyes.