The Hop STARTS at http://briclarkthebelleofboise.blogspot.com
and she will display the link to the next stop in the Hop in her post. Each blogger will do the same, so you'll be visiting every link in the Hop's chain. If that host is offering a giveaway on his/her blog, go ahead and enter to win their contest.

*NOTE* These contests are not connected to the grand prize drawings at the end of the Hop! They are for those individual blogs.
Follow the links as they lead you to the grand prize forum at the end. Fill out the form provided there and you'll be added to the drawing. Among the prizes are books, gift cards, and a Kindle. That's right. Enter to win and you'll have a chance at the grand prize--A Kindle!
So, if you came to me first, you might want to skip over to her and follow the chain. You don't want to miss out on the great posts the others are sharing! With all the amazing authors taking part, this should be a fantastic day of hopping!
Today, besides being blog hop day, is National Blame Someone Else Day.
Let’s embrace the absurdity that each day is dedicated to some inane thing and put our tongues firmly in our cheeks and blame someone else.
So this blog isn’t my fault. Let’s just put that out there.
I blame not being on the New York Times Bestseller List because Nora Roberts and James Patterson are hogging all the spots.
I blame Joe Bastardi for it raining when I want it to be sunny.
I blame my typos on Sholes and Glidden typewriter who first used the QWERTY keyboard.
I blame the recent earthquakes on kids jumping on their beds.
I blame climate change on Al Gore.
I blame racism on Rush Limbaugh.
I blame obesity on McDonald’s.
I blame Facebook and Twitter for my lack of time to write.
Let’s spread around all this blame. Who do you blame for what?
Chris Redding lives in with her husband, two kids, one dog and three rabbits. She graduated from with a degree in Journalism. She has published 6 books to date.
www.chrisreddingauthor.com
http://chrisredddingauthor.blogspot.com
Almost there to the last stop on the Friday the 13th Blog Hop!
Excerpt: Blonde Demolition
The hot spray hit Mallory's sore muscles like a thousand needle points. Her heart raced. Her mind sped past it. What could he want?
"Ask me." She heard his voice through the translucent panel of the shower door. That voice that could send a thrill through her. That voice that had whispered to her of naked pleasures. That voice attached to a body that could fulfill those pleasures. 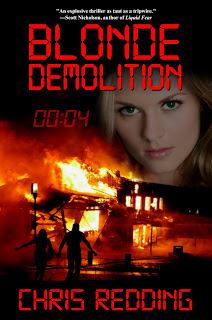 She shuddered, not surprised to see him. He had a knack for pushing through her boundaries.
"Do you mind? I'm naked, Trey."
His laugh rumbled from the depths of his amazing body. "I've seen you naked. In fact I could probably draw a road map of your body."
Her mouth went dry. She finished her shower and turned off the water. She let out a noisy breath before she opened the door. He would not get the best of her. 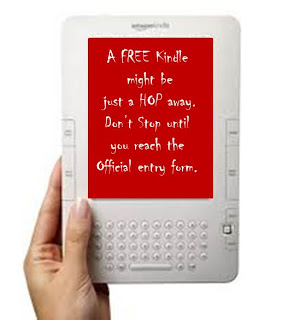 Trey McCrane held her towel as if he planned to make her barter him for it. A twinkle lit his ice-blue eyes. "Towel?"
She leaned on the metal frame of the stall, refusing to be intimidated. "Give me the towel."
He did, easier than she thought. His gaze roved over her as intrusive as if they were his hands. Even if she hadn't been naked, she would have felt that way. Trey could look through people.
Amazon: http://tinyurl.com/7olwvhs
Smashwords: http://www.smashwords.com/books/view/104247
Amazon in print: http://tinyurl.com/87qdaam
You're next stop is:
http://blog.belleconsult.com/
Posted by Chris Redding at 12:06 AM

I blame global warming on my whipped cream aerosol can :(

I blame my confusion about the blog hop on my husbands snoring.

I will have this sorted out soon, hopefully.
cmr

I blame all these fun and interesting blog posts for keeping me from writing! ;-)

Great post. I blame my new phone and it games on it for wasting many, many hours of my time!

I blame awesome authors whose books I can't put down for me not wanting to do anything but read!!

LOL - New follower here! I loved this post. So glad to find your blog and I look forward to reading more from you.

Thanks everyone for stopping by and your patience with our glitches. All is worked out now.
Hope you've enjoyed your hop.
cmr

I blame telemarketers on Bob from the Biggest Looser. I think he has them call during mealtime so we won't eat more.

I blame my bad driving on the other drivers and the road!!

This blog was great!

I blame the internet on interfering with my reading time. There are too many things to do on the net...LOL

I blame my headache on my dad XD and the landlord saying he'd be over then changing his mind!

and yeah, can't see a new blog either...

Rofl! Loved your post!! I've got lots of people to blame too - dunno why no one accepts it though, sheesh!

Your book sounds delish, and it's on my wishlist! I love these hops because I find new to me authors =)

Thank you for participating!

Hi, Chris. Got a new follower, here. So funny. I'm with Gena. Why won't anyone accept the blame? Lol

LOL thanks so much for sharing! I blame my parents! It's how they taught me!!!
-Amber
goodblinknpark@yahoo.com

I blame it on the rain *hums* lol
seritzkoATgmailDOTcom

Thank you all for hopping by
Cmr

Hehe, recommending you to my wife. :)

Oh blame day! Love it! I blame the dirty house today cuz I had to babysit my daughters cats who needed alot of attention (and snacks). Sorry about no dinner tonight hubby!

I blame my computer and contest for not getting everything done around my house.
strodesherry4 at gmail dot com